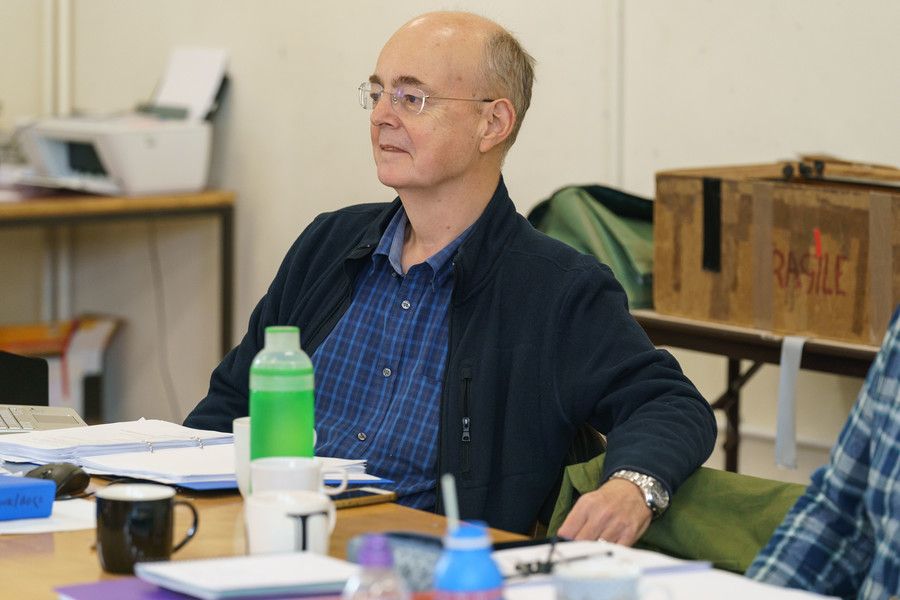 David Edgar speaks to the RSC

Adaptions of A Christmas Carol are pretty common. Adaptions where apps take the names of minor characters from Dickens' novel, being performed by the RSC, are a little harder to come by. Though we've found one and it includes a baker called Uber, and a Dickensian cook named Snapchat. The big refresh comes from acclaimed Birmingham playwright David Edgar — and spoiler alert — Charles Dickens is included as a character. More on that and the prevalence of apps in the RSC's winter production in the comprehensive Q&A with Edgar (below). Catch it from November 27 to February 4: tickets.

Birmingham based playwright David Edgar talks about his adaptation of A Christmas Carol which plays in the Royal Shakespeare Theatre, Stratford-upon-Avon this winter :

This is the most well-known and well-loved of all Dickens stories. What are some of the ways in which you have approached the adaptation to make it resonate with a 21st century audience as well as those who are very familiar with the book?

First of all, adapting a popular novel like Christmas Carol for a company like the RSC faces the writer with contradictory responsibilities. On the one hand, you’ve got to do something new and original with the novel – preferably exploiting the company’s extraordinary resources. But you also have to deliver on the promise of a family Christmas show. Luckily, the reason that the Carol has been adapted so frequently is because it is so richly dramatic (in a way that Nicholas Nickleby, which I adapted for the RSC in 1980, isn’t always). Much of the dialogue can be transferred directly from page to stage. And it’s structured like a watch.

I’ve thought and read about earlier adaptations for stage and screen (and watched most of the films, over successive Christmases). In retrospect, you can see how the Carol of the 1870s (Christian allegory) was different from the Carol of the 1930s (anti-capitalist polemic) or that of the 1950s (Freudian case-study) because the times were different. I thought it would be dangerous to work out what a Trump/Brexit era Carol should be about, in advance. But now I’ve written it I think the adaptation does address some of the themes of our time.

What was the most challenging thing (apart from the above fact) about adapting this book for the stage?

The difference between Nicholas Nickleby and A Christmas Carol is that with the former novel nobody knew the characters (beyond – probably - Nicholas, Smike and the evil schoolmaster Wackford Squeers); even I had to ask if it was the one with Mrs Gamp in it. So adapting it was revealing, if not a masterpiece, then a novel of great and underestimated strength and power. With the Carol, you are adapting something that’s very familiar, not least because – if you don’t know it, or have forgotten its structure – the Ghost of Marley will explain what’s going to happen before it does. So I think the challenge was doing something new with it.

What was your reasoning behind including Dickens himself as a character?

I’m not the first person to think of including Dickens as a character in an adaptation of one of his novels. But I knew about the process by which he decided to write it – originally as something quite different (not a novel at all), and then in a huge rush between October and mid-November of the year in which it was published. I felt that his presence would foreground the politics of the novel (which can get concealed under the sentiment) and I liked the idea – with such a well-known text – of finding a way of representing the very act of writerly creation. It’s been hugely enjoyable working with Nicholas Bishop (as Dickens), Beruce Khan (as Dickens’s editor John Forster) and director Rachel Kavanaugh on dramatising that idea.

Which Dickens character do you most identify with?

I find that oddly difficult to answer. The novel I like most is Little Dorrit. The moral centre of Nicholas Nickleby is the central character’s relationship with Smike, a disabled child who Nicholas rescues from a terrible school. I identify with that relationship, certainly.

You are known as a ‘political’ playwright – how do you go about highlighting the politics in this story which is mostly known for its ‘festive/redemptive’ feeling?

Dickens himself wrote the Carol with a political purpose. The Christmas Present section ends with a coup de theatre which demands that we think, not just about the children who suffer in the novel, but all the children — many effectively slave labourers - who were conscripted into the mines and factories of 1840s Britain. Dickens wrote the novel in the middle of what was later to be called “the Hungry Forties”(as the previous decade was called “the Angry Thirties”), possibly the worst time in the last 200 years to be alive and poor. It is possible for the story to be interpreted as the study of the psychological limitations of one man, but I think that would be defying Dickens’ own ambitions and narrowing his achievement.

Touchnote have already contacted us and want to know how/why you chose that name. Can you give a line on what you think the other characters you have created will be like (a bit of backstory for Herr Uber, Snapchat etc)

One of the amusing problems you have in adapting a novel for the stage is that the novel will probably contain unnamed characters who may be referred to fleetingly or collectively. There are some important characters in the Carol who aren’t named (including the two charity collectors who call on Scrooge on Christmas Eve), and there are two parties which need to be peopled by specific characters with specific names. I’ve enjoyed coming up with what I hope are suitably Dickensian names for the “extra” characters. Audiences may spot some motorway service stations and some noted bookshops. For the Fezziwig party, I was looking for at least half a dozen names for characters mentioned or implied in the text. I then saw reference to the app Snapchat, which seemed a great name for a Dickensian cook. I then brainstormed other apps – from Tumblr via Uber to Hinge – and created partygoers for whom those names would be suitable (Tumbler an aged retainer, Uber an Austrian baker, Hinge a debtor). And the violinist had to be Mrs Touchnote.

A Christmas Carol by Charles Dickens, in a new adaptation by David Edgar.