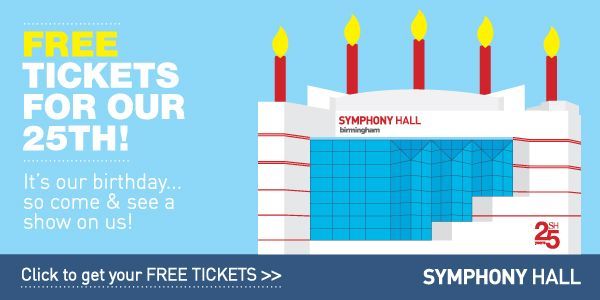 A Free Concert (And a Bloomin' Good one at That)

Celebrate 25 years of the Symphony Hall

Plans for Friday? You do now.

You are invited to celebrate 25 Years of Symphony Hall at a free anniversary concert from 7.30pm (Friday 15 April).

Symphony Hall’s Resident Orchestra, the City of Birmingham Symphony Orchestra will be joined by three artists who each celebrate their 25th birthdays in 2016: conductor Jamie Phillips was born and raised in Brum and is well on his way to becoming a major international success; pianist Lukas Geniušas, one of the recent winners of the XV International Tchaikovsky Competition and a Birmingham debutant; and composer Ryan Latimer, a graduate of Birmingham Conservatoire who has already made his mark on the industry and has been commissioned to create a new work to mark their 25th anniversary.

At the centre is Stravinsky’s Firebird – the work that was performed at the Hall’s official opening (then conducted by a bright young thing by the name of Simon Rattle).

Oh and the price is right. Free for all under 25s, it's now also free to all I Choose Birmingham readers, irrelevant of age. Simply follow this link and apply the code TN25 at this point in the checkout process...