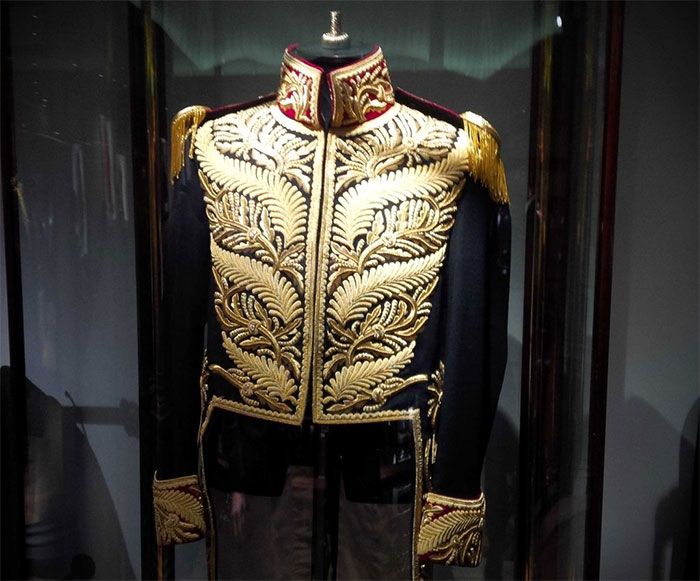 Cocktails, canapés, shoe-shining and a journey through some of the most iconic men's suits ever crafted. All for free. The Mailbox are pushing the boat (canal barge?) out on their next live event, which will be hosted at Gieves & Hawkes, one of the oldest continual bespoke tailoring companies on the face of the Earth.

G&H's head tailor will be guiding all guests through a handful of the most memorable suits, why they had the impact they did and on whose famous shoulders they hung, and he'll be bringing with him the actual military style suit worn by Michael Jackson on his 1988 BAD Tour (pictured). The suit was made by Gieves & Hawkes, a company whose history stems back to providing uniforms for the British Army and the Royal Navy.

Jackson's entourage, so the story goes, drove past Gieves & Hawkes 1 Saville Row location in July of '88, and MJ himself spotted a military suit in the shop front. One of his team called the shop. "We knew immediately what he was talking about," Gieves & Hawkes director of military tailoring once said. "It was an official privy councillor diplomatic uniform. You couldn’t really miss it. He said Mr Jackson was in a hurry... He wanted one to be ready for the UK leg of his world tour: the Wembley Stadium shows were two weeks away.

"Normally, it takes four months to produce a piece of bespoke military wear, so a couple of us went right around to his hotel. I had a maximum of 10 minutes with him."

To find out how that one panned out, while supping on cocktails from Aluna and canapés from Malmaison, book your spot free at the May 24th event, here.

G&H will also be giving one attendee a ready-to-wear suit and fitting experience on the night. Which, with only 60 places available, makes for pretty decent odds. Those blooming lovely chaps from The Barber House will be on free shoe-shining duty and will also be offering the chance to win some male grooming prizes. See you there, then.