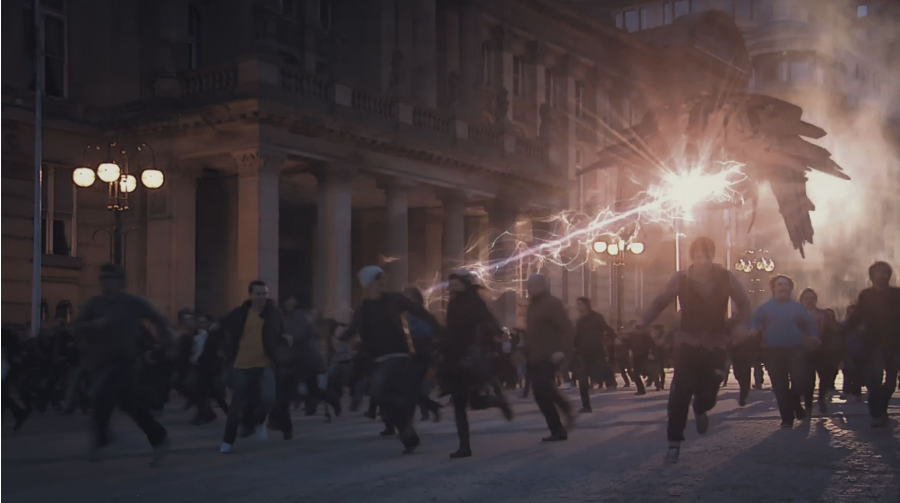 How a Brum-made, small budget sci-fi movie may multiply

We like to big up Birmingham as much as we can. Others, however, like to tear it down. Or even blow it up. We’re talking about Simon Cox, the West Midlands filmmaker whose alien creations invaded the centre of Brum in his micro-budget but mega-ambitious Sci-Fi film, Invasion: Planet Earth. The film went on to gain fame (and a little infamy), cinema distribution and a place on Jeff Bezos’ space travel funding streaming platform.

Not content with creating “a British Sci-Fi Classic” as the London Screenwriters Festival called it, Simon’s now working on an entire trilogy. Starting with Of Infinite Worlds, he’s tempted to once again target Birmingham. We clearly needed to have a word. 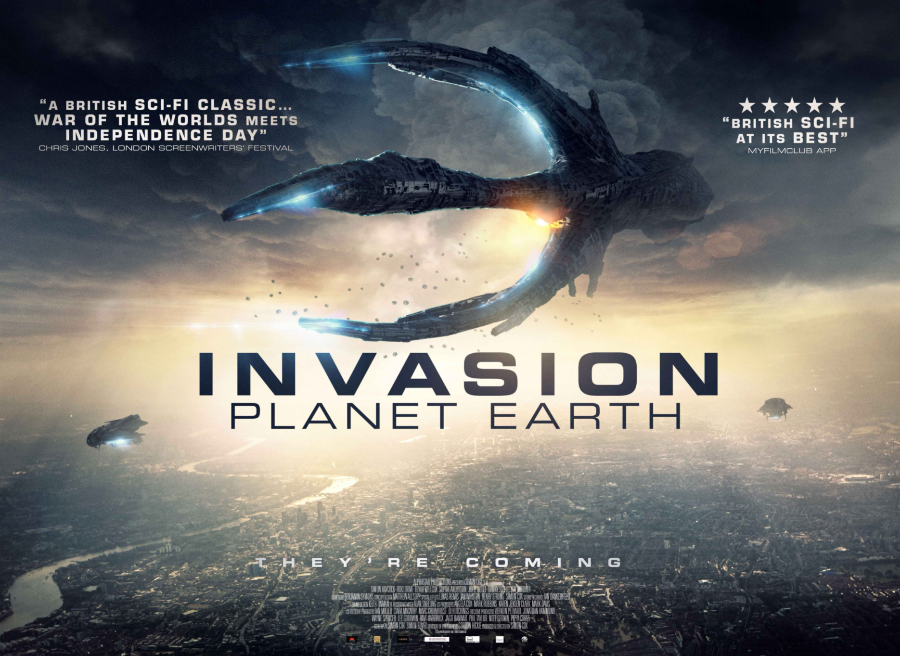 Simon talks at a rate of knots, taking theatrical pauses for breath and to acknowledge he’s aware of his pace. He’s the best kind of film geek too; he doesn’t delve into discussions on frame rates or hairs in the gate, he just emits an endearing enthusiasm, even when talking about how much of a challenge it was to get his independent film project off the ground and that little bit closer to space.

“Two years of Crowdfunding,” he says, momentarily exhausted by the memory, “now, that was a slog! It was the people of Birmingham that really got behind me, though. One of the first things I did was shoot a crowd scene where the spaceships are attacking the city. We put a call out on social media looking for extras and before we knew it, we had nine hundred people involved. Can you imagine that? People were pouring out of the pubs, hearing all this screaming as people were running up and down the street. And there we were, getting them to sign disclaimers as they ran.” 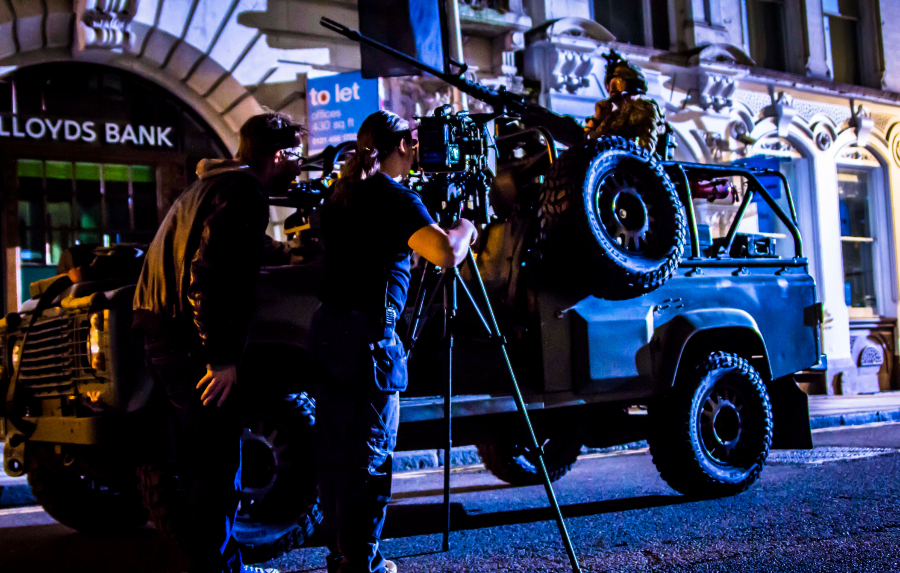 A thousand people running and screaming around Victoria Square wasn’t enough of a spectacle for Simon so, like some of us wish we could during the German Market, he called the military in.

“We got two tanks, an armoured personnel carrier and a jeep with a mounted machine gun,” he says a little too calmly, “and we got 40 soldiers in too. I really wanted the tanks to 'fire' because I didn’t want to use CGI and people got worried pretty quickly,” he chuckles. “But by the time they got to the Floozie, I knew we could get the same effect with a flash. But even then, there was concern about the noise. Imagine if it broke all those windows? Boooom!” 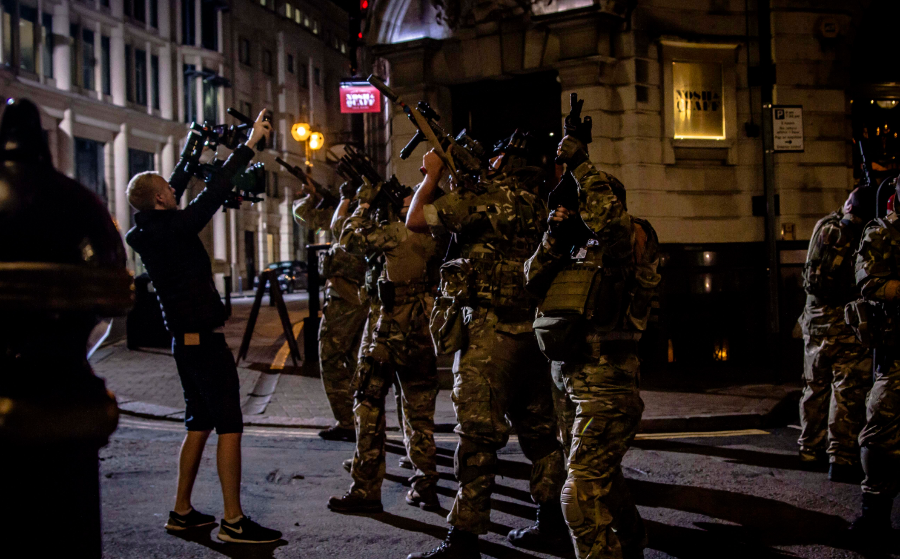 Whilst the thought of hundreds of panes of glass shattering and showering down onto Colmore Row makes for an iconic image, the reality is that the flashes were tested extensively and that Simon had to knock on every door beforehand, just to let them know that it was only a pretend military takeover and not a Manchester coup. “I’m very proud of that. What an achievement.” It wasn’t just Colmore Row that took a pounding though. Town Hall was surrounded by alien spacecraft, Millennium Point got overrun by zombies and BMAG, well, BMAG just looked lush on screen, to be honest. 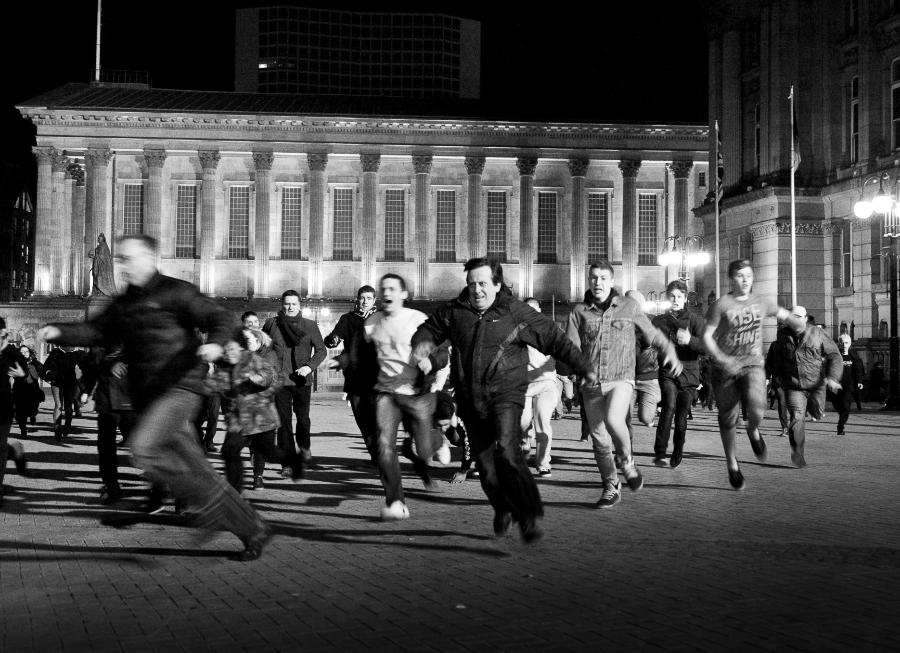 For someone who started flirting with filmmaking quite late in the day, these are achievements indeed. Positions as a former trainee chef, assistant manager of a shoe shop and a stagehand all lead to Simon landing a role as a runner for a company called Filmfare, where he honed his craft editing children’s shows such as Huxley Pig and, *checks notes* something called The Wombles. Even while also working as a wedding photographer, Simon continued to graft away behind-the-scenes as he edged ever closer to his dream of directing his own Sci-Fi films.

Simon owes at least a little bit of that dream to Film Birmingham, the Council’s film office who helped him out with logistics and locations. “I’m not saying that I got the same treatment as Spielberg,” he laughs, “but it felt pretty close. They were doing Ready Player One and Kingsman: The Golden Circle at more or less the same time as us and we came out of it pretty well.” 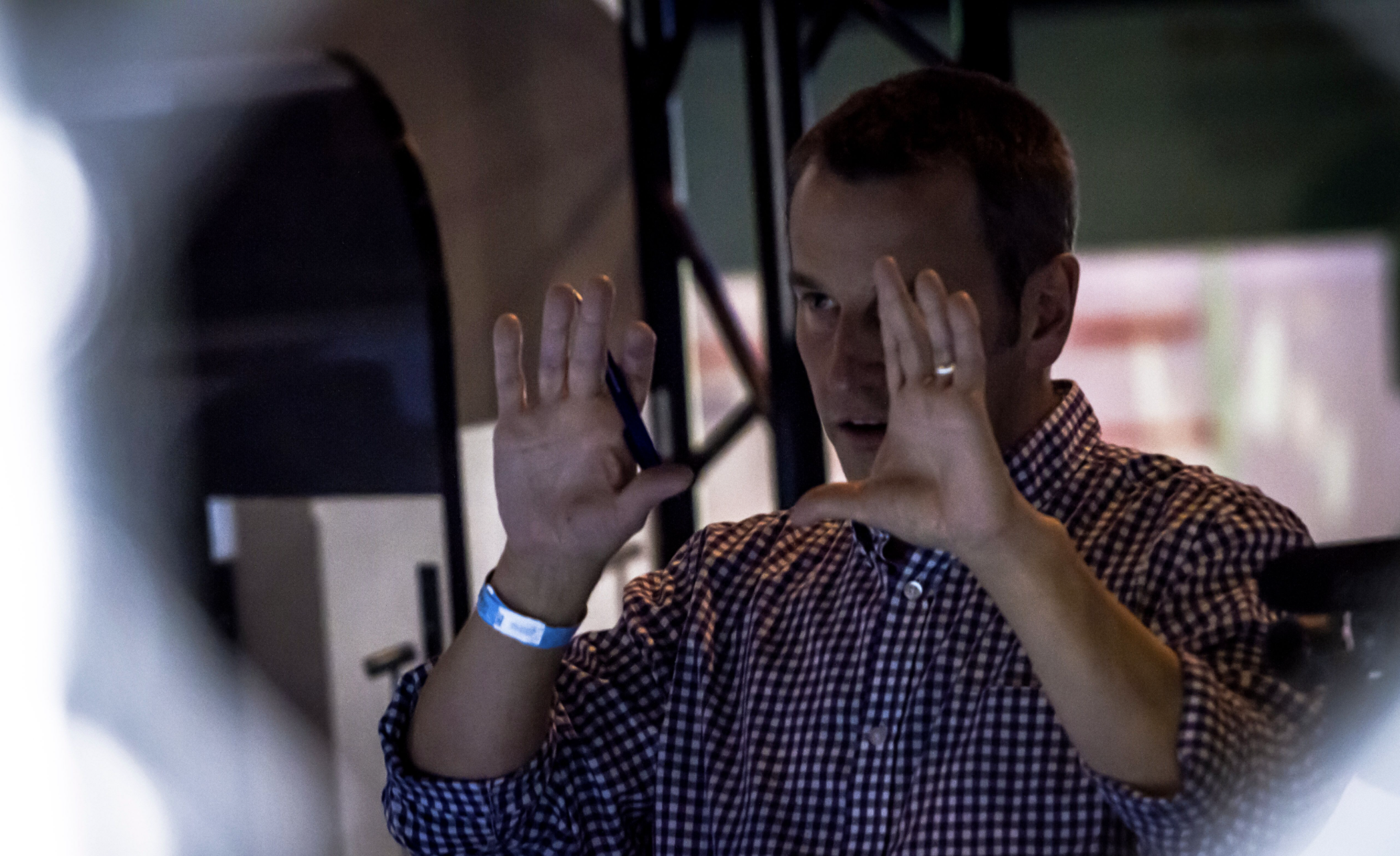 It’s taken twenty-years to realise his dream of shooting Invasion: Planet Earth, and this Roy Castle-esque level of dedication has enamoured the film to Sci-Fan fans. Well, most of them. Trouble is, the big budget blockbusters we’re used to seeing on cinema screens cast a long shadow over independent filmmakers on a micro-budget, as Simon found out in the dreaded comments section. “It was a bit hurtful,” he says, underplaying it perhaps. “You put yourself out there and it’s like standing against the wall. People just start shooting. I had this vision of huge Star Wars-style special effects, but the money just wasn’t there. So, what do you do?” he asks.

“I learnt to do as much of it as I could by myself, and I got a few friends to help me with the rest. Some people just don’t understand how hard it is to do something like this. You try getting tanks into Birmingham,” he jokes. 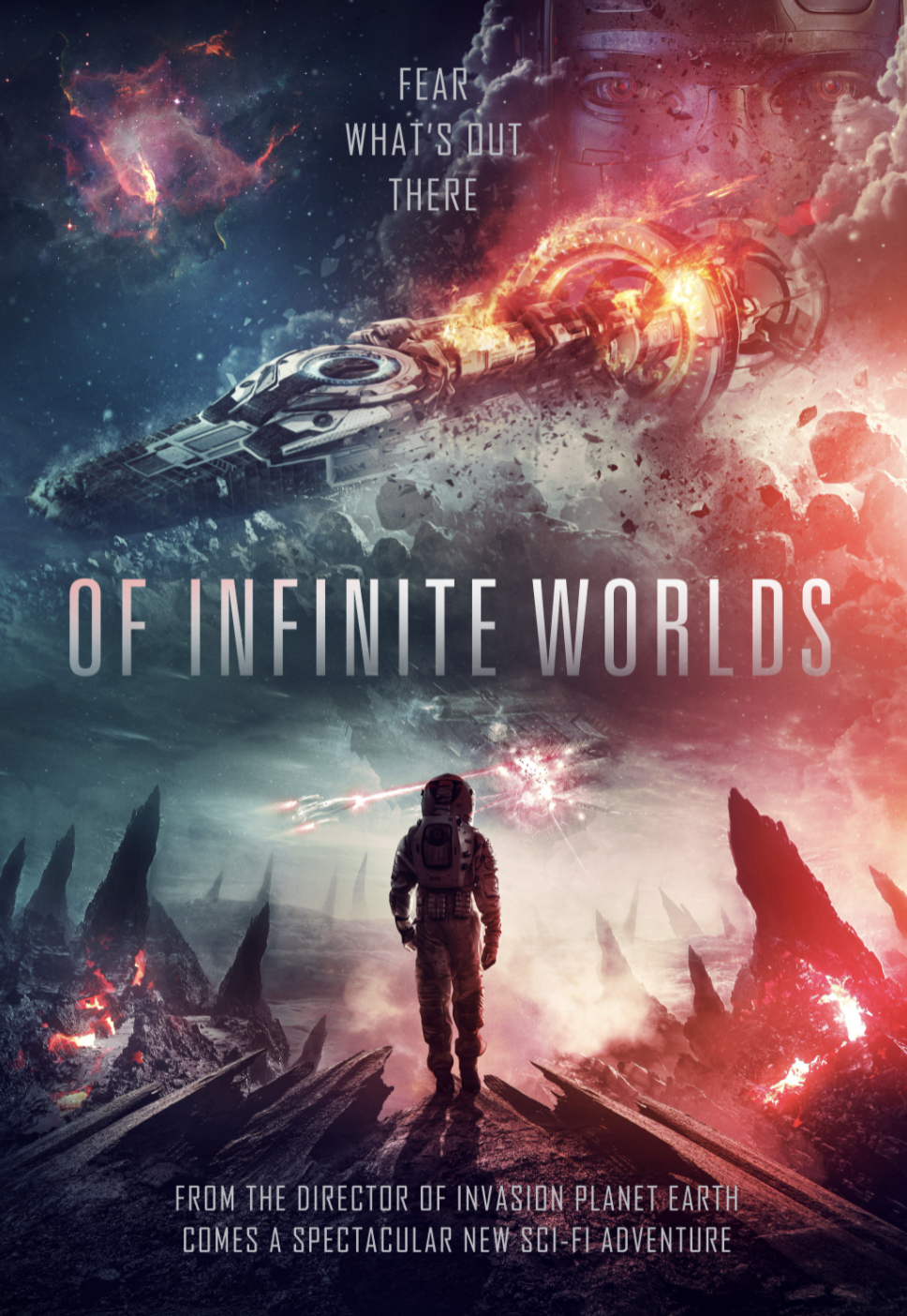 Just a few hours after making Invasion: Planet Earth available on digital platforms, Simon found out that his film was trending, albeit, on The Pirate Bay. The film had even been translated for foreign audiences. “And then, these absolutely dreadful reviews came up,” he says, before breaking off. “People were really nasty, really laying into it. I was kind of annoyed at that. Are they pirating the film and then just slagging it off?” he asks.

Although he admits that this floored him at the time, Simon takes it all in his stride. “I guess it’s easier to knock down than it is to build,” he says.

Turns out these negative reviews ended up contributing to the film’s success, especially in Australia, where film fans rallied behind Simon as the underdog and even coerced him into filming a video where he responded to individual criticism from the online trolls. It’s also worth mentioning that this is the man who once got dragged over a bar for serving Oliver Reed a cold drink in a warm glass. Yes, that Ollie Reed. It’s safe to say that Simon can take a little criticism.

Regardless of the keyboard warriors’ lack of appreciation for low budget film making, Invasion: Planet Earth has managed to secure those ever-elusive distribution deals in the UK and across the pond, which is seeing the film becoming something of a cult attraction. Not only that, but its success has inspired Simon to push harder and set his sights higher. His lockdown project saw him dragging himself out of bed every day at 5am to hammer away at the script for the first instalment of his new trilogy; Of Infinite Worlds. Inspired by Disney+’s The Mandalorian, Simon's using virtual production techniques to realise his vision. To you and me, that‘s basically a huge wrap-around LED screen that the actors can do their thing in front of, while the background shows anything from an alien world, the depths of space or a packed-out Primark. 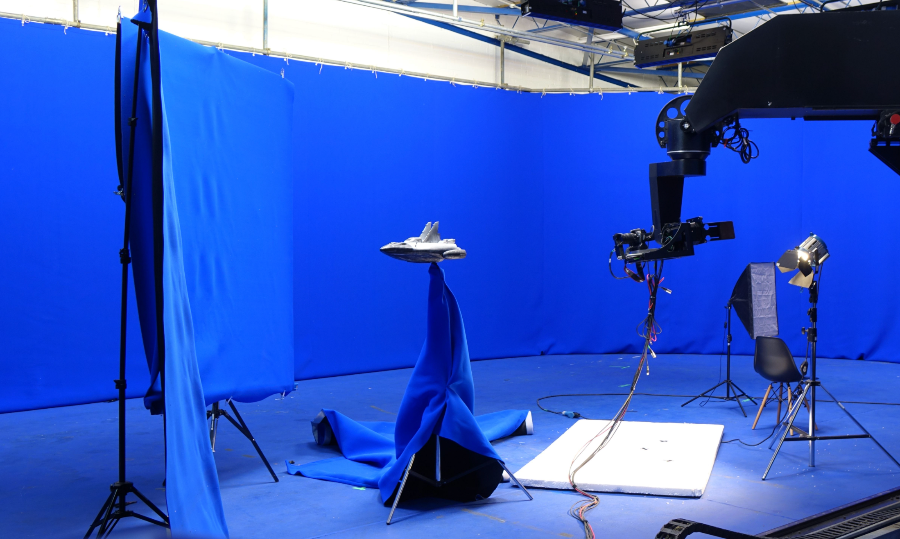 It's not all CGI, mind you. Of Infinite Worlds will also rely on using theatre staff to build actual sets to work around, as well as intricately detailed practical models replacing the computer-generated spaceships (created by Richard Dixon, the chap who used to design and build He-Man and Action Man figures, no less). With £250,000 needed to fund his new venture, Simon’s also learned more effective ways to finance. Having lost 10% of each donation through the seven campaigns he ran for Invasion: Planet Earth, he has instead released a line of exclusive backer-only merch to reduce the number of little hands that dip in whenever you use online platforms to crowdfund. As with Invasion, Simon’s planning on giving supporters the first refusal on roles as extras in the upcoming project and is still on the look-out for locations around the city, which can only mean more of both Brum and Brummies on the big screen.

You can support Simon and his new trilogy by buying a mug or t-shirt or, most impressively, by pledging to become an Associate Producer of the film (with your name in the credits to prove it). In fact, that’s got quite a nice ring to it: “What’ve you been up to, mate?” “Produced a movie, mate. You?”

Of Infinite Worlds starts shooting at the beginning of December.