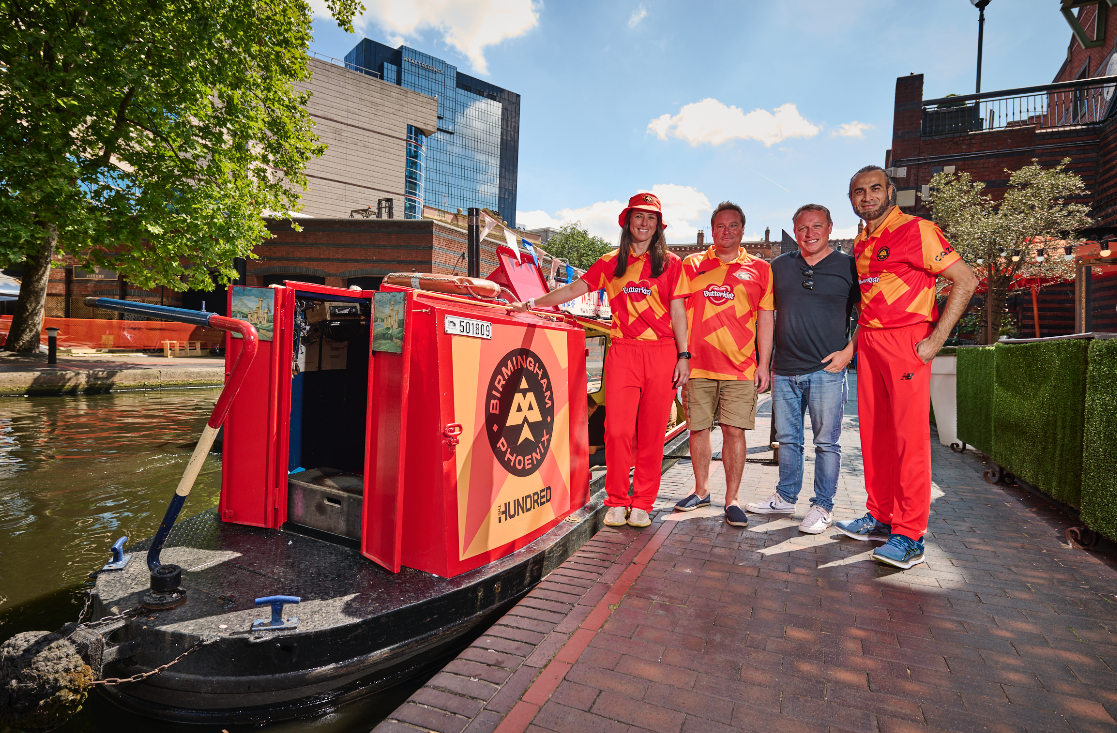 In what many suggested was, in a busy field, I Choose Birmingham's laziest moment, I interviewed my brother, last year, in the run up to the inaugural season of The Hundred — cricket's newest and fastest paced format. Turns out it was an editorial call so astute even Spider-Man newspaper misery, J. Jonah Jameson, would have doffed his cap, given it caught the eye of the big wigs at the Birmingham Phoenix and they invited my bro to interview two top players.

Now, I'm not saying he's making a play to force me out of my own company but quicker than you can say 'hostile takeover' he was on a canal barge in Brindleyplace chatting to South African leg spinner (and the man behind this legendary hat-trick) Imran Tahir and Wolverhampton all rounder, Georgia Elwiss, as I frantically scribbled down notes for him.

And if there just so happens to be a very recent sports-shaped void in your life, then get it filled with The Hundred. It's as easy to fall in love with as a giant, mechanical bull... but just as susceptible to rain.

You’ve both returned to The Hundred for a second year and you’ve both returned to Birmingham Phoenix. You must like it here?
Imran: Yeah, absolutely. It’s a great competition and it’s still something that’s very new. It’s good for kids, it’s good for families and the level of support from the people of Birmingham last year made it an easy decision. As a player it’s so important to me to inspire kids — we did that — and we’re focussed on doing it again.
Georgia: For the women’s game I don’t think we realised how big it was going to be, but then the crowds came. For us The Hundred has provided serious exposure. Last year, because of COVID and bubbles, we didn’t get much interaction with the men’s team but this year will be wanting some training sessions together so we can pick up some tips and tricks — grab ideas from the guys who have played the game around the world. It’s a real opportunity. Suffice to say we want to inspire as many young women and girls as possible, but equally I have three nephews walking around with Phoenix shirts on and 'Elwiss’ on the back. There are kids who want to be [Phoenix women’s bowler] Abtaha Maqsood just as much as they want to be Imran Tahir, and that’s the pure beauty of this version of the game. Kids see the women’s and the men’s teams on the same level, and they’re equally inspired by both.

Last year was really good. The women’s team got to the Eliminator and the men got to the final. And for Birmingham that was great… for last year. This year, though, the city is almost a different place given the last fortnight. So you’ll both be winning it this year to reflect that, right?
Georgia: The Games have been extraordinary. I feel like every Brummie was a volunteer given how many uniforms I saw day-to-day. And when you bear in mind that the build up for it was all through COVID it’s even more astounding how well they pulled it off. Being from Wolverhampton I felt that vibe and I felt that pride, and we go quickly into The Hundred now, and the trick is to capture those people that have been to the Games and harness their energy into more live sport.
Imran: And you can have the best squad in the world but you’re not guaranteed the win. All my life I’ve looked to give 100% and that won’t change this year, and my teammates will do the same. But we do feel that expectation and I’m sure The Games will add to it. We need to be true to our training and hopefully deliver on the pressure. But, honestly, we want to win people’s hearts more than we want to win the game of cricket. Hopefully... we can do both.

And it was a Games that had more women’s medals than men’s — gold in the hockey and countless other successes. On top of the Lionesses, it’s a hell of a time for women’s sport.
Georgia: We’re on a roll, aren’t we? And as females in sport we absolutely feel the need to keep that ball rolling. Keep that momentum. It’s like Immy said, we want to win the hearts of people and we want to do it the right way. Playing in the right spirit and making the fans proud. We need to jump on the bandwagon and do our bit to keep it propelling forward.

It’s quite a short competition, which adds to the excitement. But is there enough time to generate camaraderie?
Imran: When you travel around the world playing the sport you get better and better at being able to gel in short periods of time. So yeah, it’s doable. The key to it is understanding that all the players come from different parts of the world and you need to try and understand their culture. If you respect each other — and that should come easily — you can gel with each other. And that goes across the two teams. We’ve sat and had drinks with the women’s teams and that’s not something I’ve witnessed elsewhere in the world before the Birmingham Phoenix — and it’s absolutely great.

100%
Georgia: I mean black’s slimming but our kit represents the vibrancy of The Hundred. I wouldn’t change it. 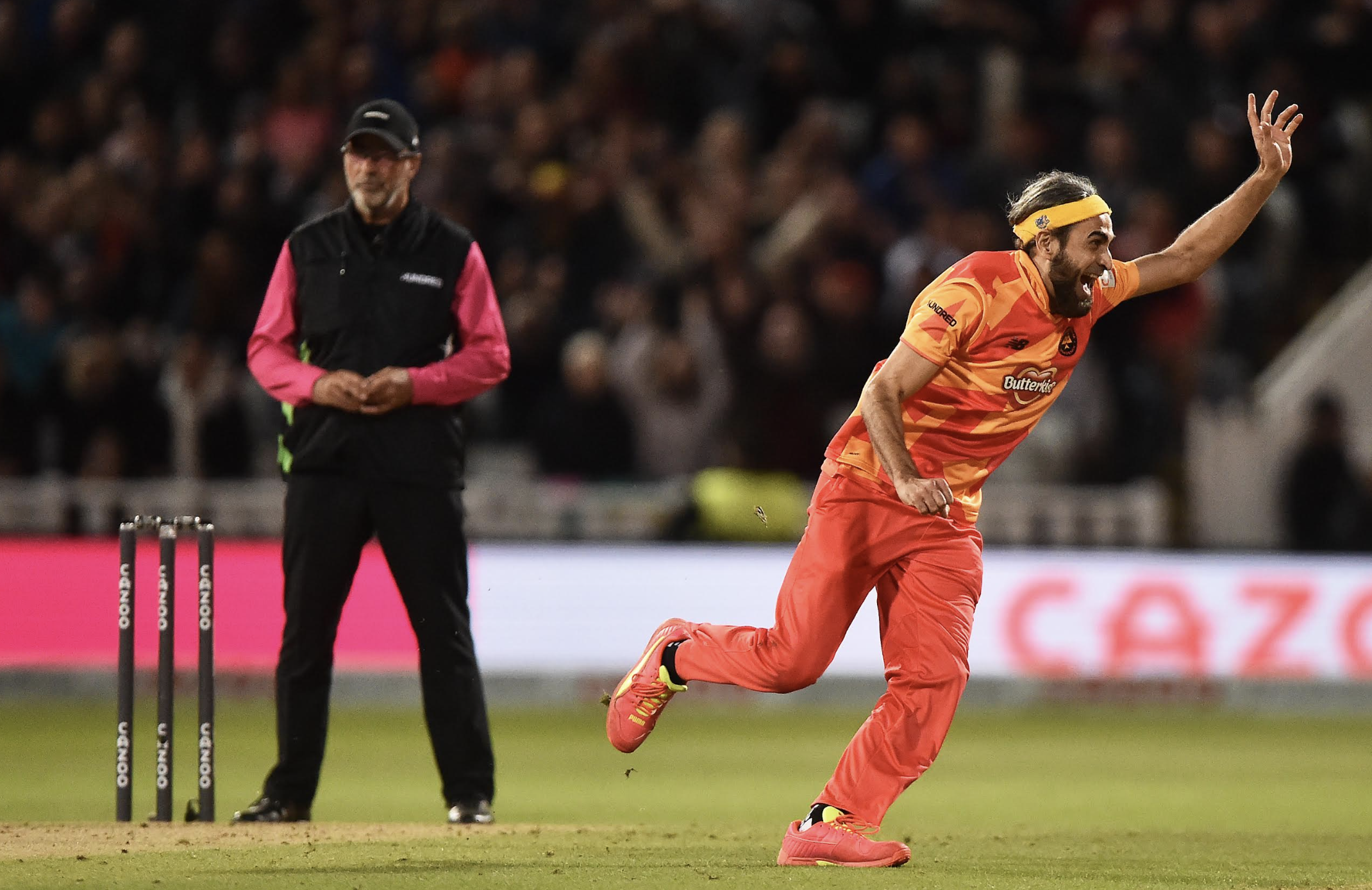 And it looks particularly good, Imran, when you nail a hat-trick and go on a sprinting celebration [above]. I thought you were just going keep going, into Cannon Hill Park and down the Pershore Road…
Imran: I’ve got a hat-trick for South Africa and a hat-trick in the PSL [Pakistan Super League], but this was the best moment of my career. On my third ball, after I had bowled it, I could see [the batter] going forward and I saw the gap it was heading for. Only I could see where it was going, and I knew before everyone it was a wicket. And that was that, I was off, running!

It’s a good job that was the last wicket because you must have been shattered after that celebration?
Imran: [Laughing] That’s true. And I gave everything on that last ball and, you know, it’s funny because I wasn’t feeling well at that point either and nobody really knew. But all that vanished — tiredness, illness, gone! In front of a home crowd it was just… well… I can’t put it any other way. The best moment of my career.

Birmingham Phoenix continue their season with games at Edgbaston on Aug 19 (versus Northern Superchargers) and Aug 28 (versus Manchester Originals). Expect DJs and live music thanks to The Hundred's BBC Introducing partnership. Tickets