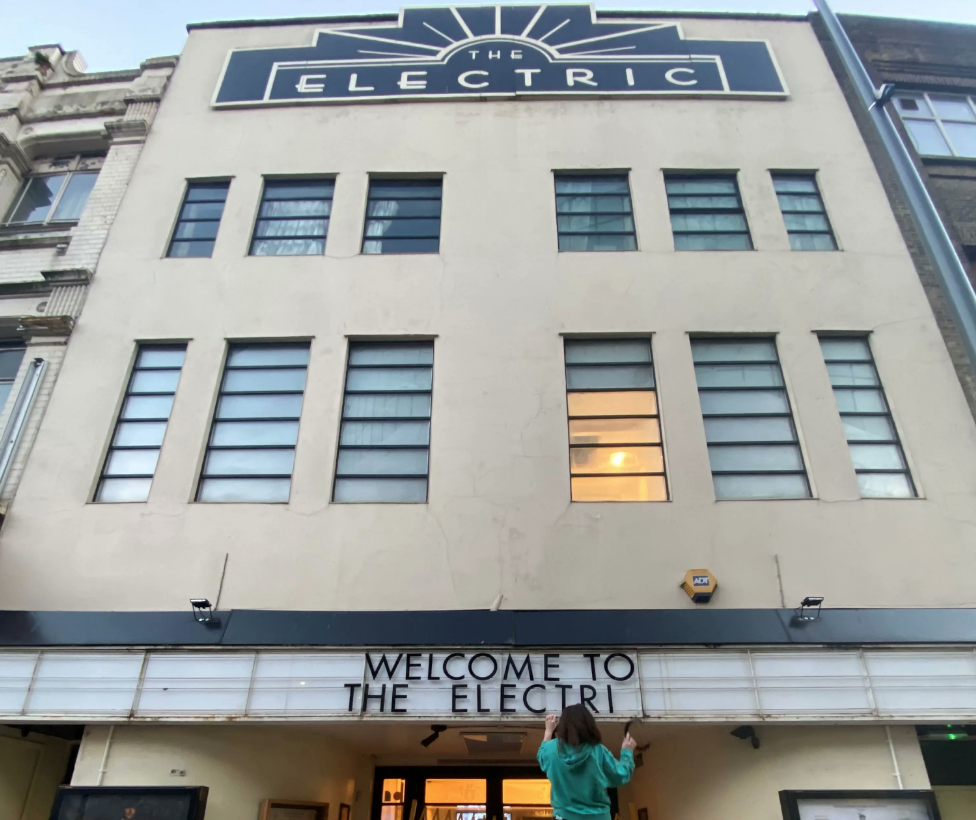 "Being sat in a cinema is the place I'm most comfortable on Earth," says Kevin Markwick, the new owner of The Electric. "I'm marinated in film." It's a joy, and I mean that, to hear Kevin speak. Any owner, within reason, would have been better than no owner, which at one stage looked like a real possibility for the oldest working cinema in the country, but it just so happens we've landed a fanatic. Kevin is responsible for the highly successful Uckfield Picture House, an independent cinema in East Sussex, which has been in the Markwick family since 1967. His Dad worked in cinemas all his life and Kevin's daughter, Katie, has moved to Birmingham "lock, stock and barrel" to ensure Brum's home of film gets the attention it deserves. We had a quick Zoom about what the city can expect of The Electric's new dawn. 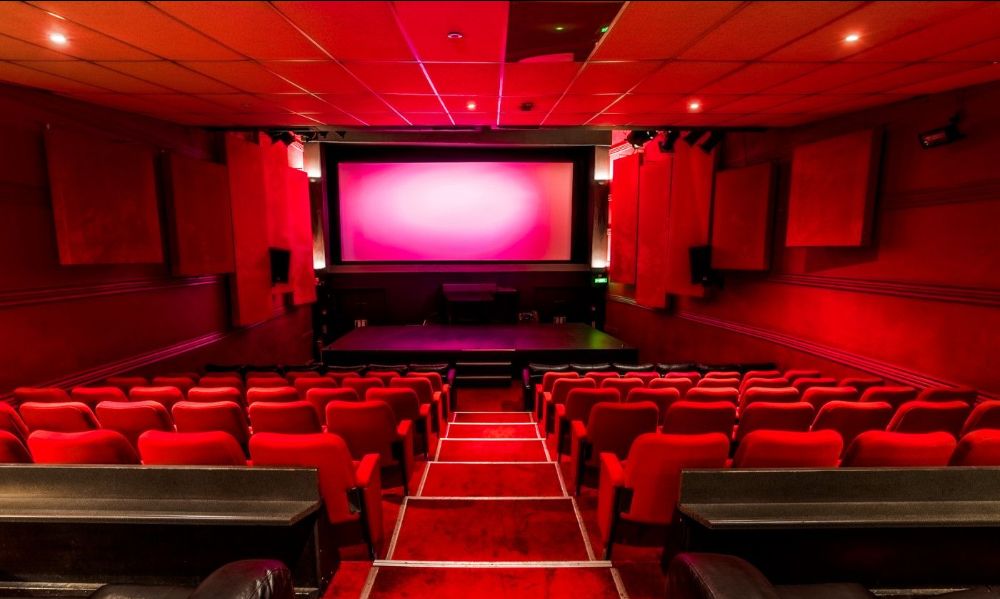 Inside The Electric recently, and below, how it looked in the 1930s when it was known as Jaceys 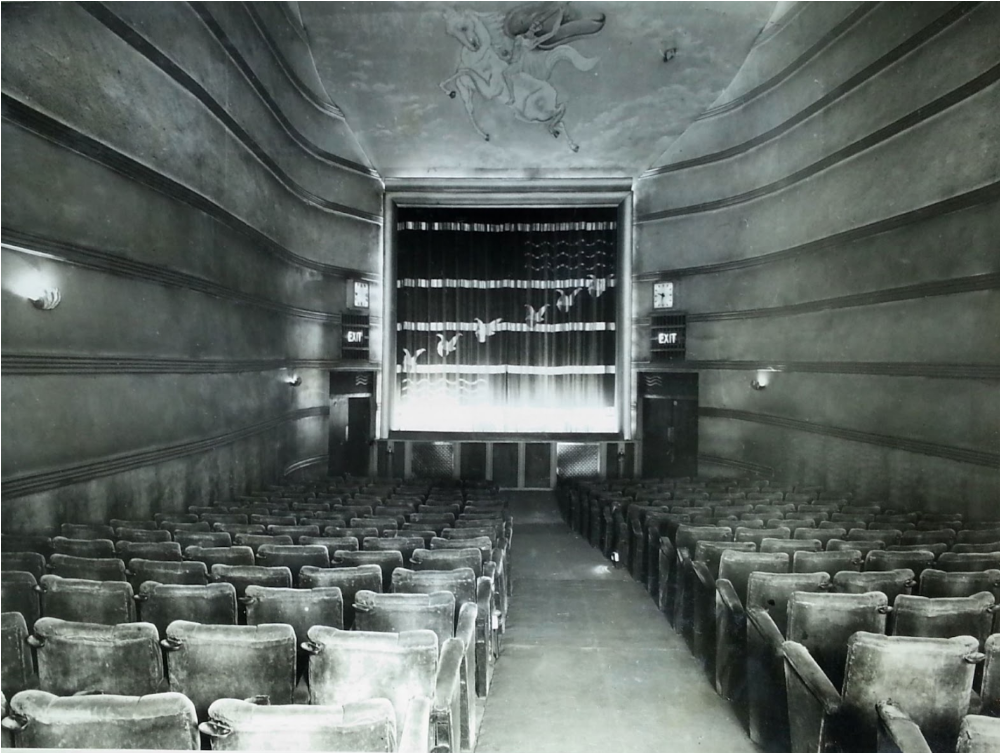 I take it you got an early feel for how important this cinema is to Brummies?
[Laughing] Oh yes. I did an offhand post on my Twitter feed [saying he'd bought it] and it just blew up. And I mean it went absolutely crazy. The love for the venue was obvious.

Does a lot of pressure come, part and parcel, with that level of civic passion?
Yes, but we’re used to it. We feel the pressure, but we’re already looking after one historical site here in Uckfield, and The Electric is exactly what I was looking for. Something to love and cherish and take forward. So, I guess, it’s more exciting than pressured. I’m not phased by the pride and passion, instead I appreciate it immensely. Presumably it will make my job slightly easier. Getting bums on seats won’t feel like shouting into a black hole of nothingness. The desire is already there to buy tickets.

How much TLC does it need and what was awaiting you when you first walked through the doors?
Well, it wasn’t quite as 'oven ready' as I imagined. Digital cinema equipment doesn't like being turned off. It works better if it remains on and in use, for all sorts of practical reasons, not least encryption. Studios are terrified we're going to copy their films and sell them down the pub, which would be like sh*tting on your own doorstep, not to put too fine a point on it. So studios have it so they can detect if you ever break the link between the server and the projector, as it might be an indicator that you’re trying to copy the film. But the big red switch of lockdown clicked and it meant this gear had to be turned off along with much of the country. When that happens, the equipment is essentially dead. All bets are off. So that needed sorting, then there were one or two other things that blew up when we turned them on and we needed to work out what was worth resuscitating and what wasn’t. And on the technical side of things, not much was salvageable. 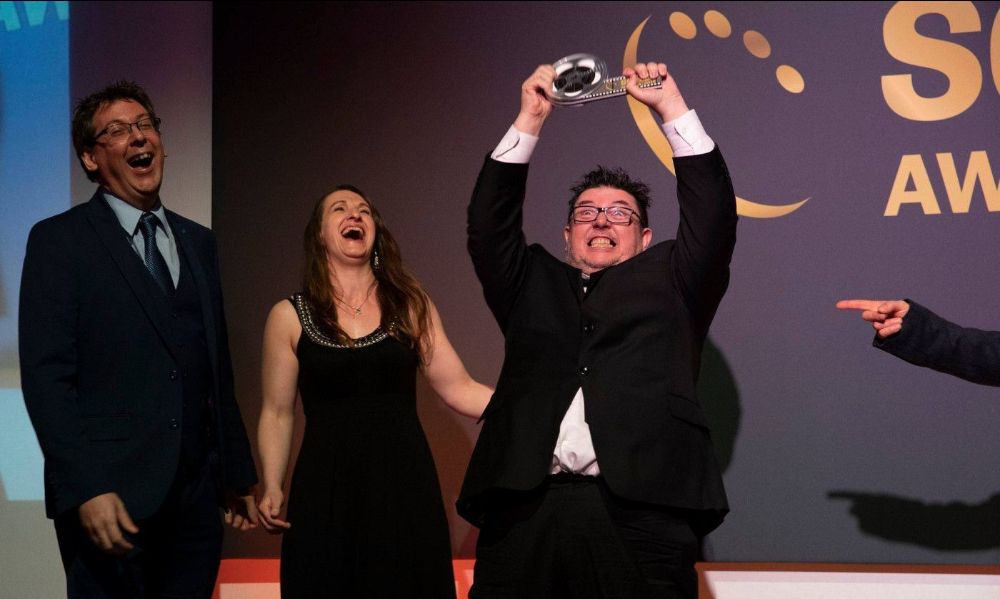 Kevin and team winning Cinema of the Year, 2018

But there was a really old 35mm projector that did survive, right?
Yes indeed. That’s mechanical, analogue, old school. I’ve been working with that sort of thing since I was 14 years old. I can keep a movie going on one of them with just my right finger and a roll of duct tape, so bringing that back to life was easy. It's the digital stuff that sometimes stumps me, when it's just a black box and all you can do with it is turn it off and on again. But the 35mm works a charm and we're going to start by showing one 35mm movie a week, alongside all the digital stuff.

In laymen’s terms what does the 35mm offer the audience?
It’s all part of the analogue revival, isn't it? It’s difficult to argue that a big resolution audio file or a CD is worse than vinyl, for example. But people want to engage with vinyl. It’s the same with 35mm film.

It’s vinyl for the eyes?
Exactly! With all the joins and scratches and authenticity that comes with it. But I don't know if Brummies want to watch 35mm. I don’t have any historical data for The Electric at all. I have no idea what will work and what won’t; no idea what did work and what didn't, before our arrival. I have quite good instinct for that sort of thing but no hard evidence from the previous ownership. We’re going to run a mixture of first run movies, repertory cinema [old stuff] and still put on events. It’ll take us a while to work out what works and what doesn’t. We will need to feel our way. But having run a cinema for 28 years I like to think we have an idea of what appeals. I mean, we're not 'playing cinemas', we're professionals. Very good at what we do. Plus, in Uckfield we have a population of just 18,000 and about 90,000 in our catchment area. We punch way, way above our weight, but there are many things I like to do here that maybe fall flat sometimes, because the audience just isn’t there in large enough numbers. But the population of Birmingham is... what?

1.1 million.
Hahaha! So you’d hope there would be enough like-minded idiots who will want to engage with my kind of thing. 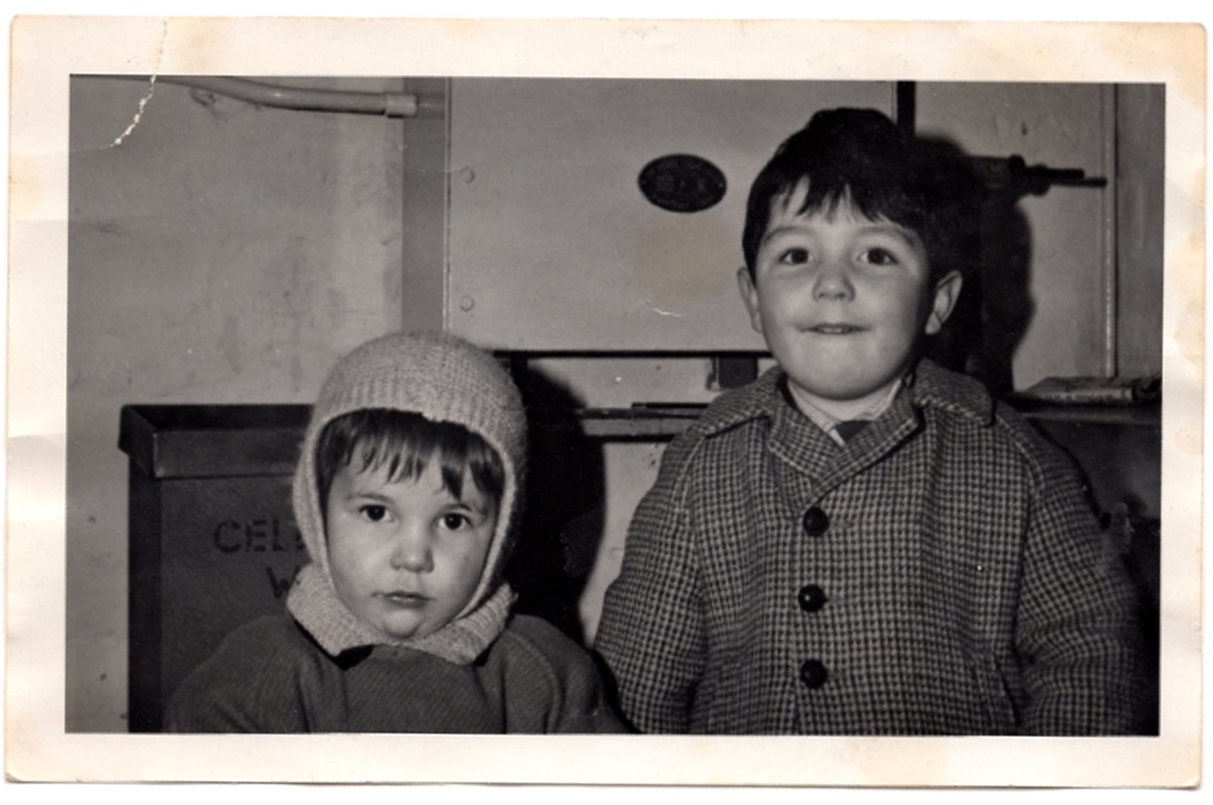 Kevin (right) aged five, in a cinema projection room with his little brother 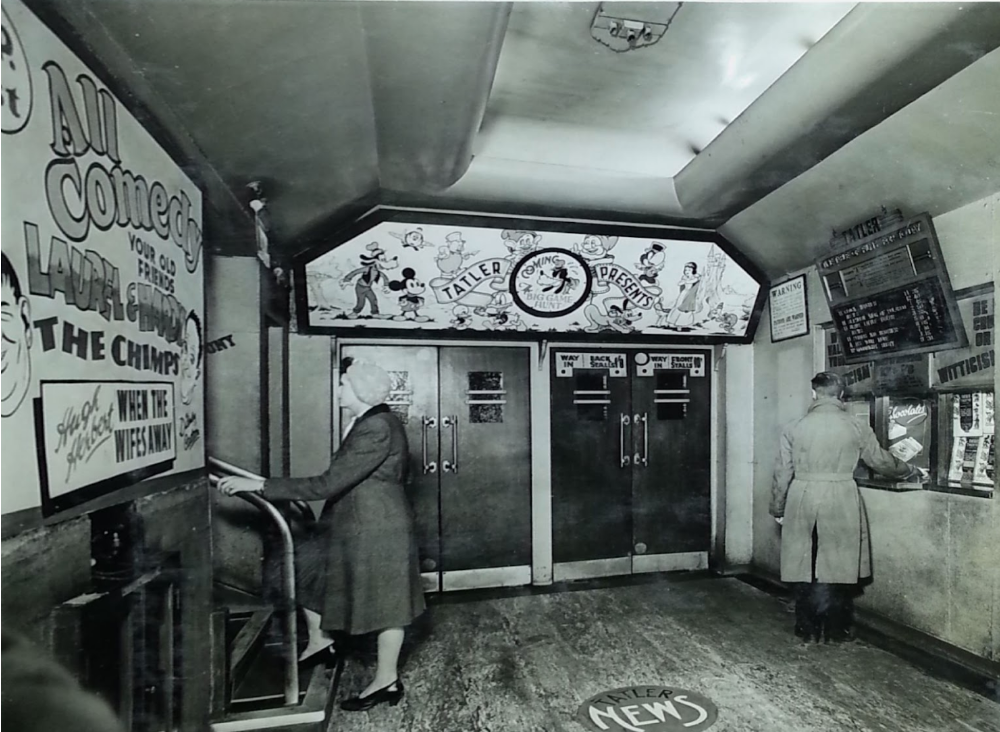 That lack of historical data, presumably, means the people of Birmingham should expect the unexpected.
Yep, completely. I’m mindful of how beloved it is, so I don’t want Brummies walking in and looking around and saying "what the hell is this sh*t?" But at the same time we have to move forward. I’m not too concerned with the competition — I won’t be chomping at the bit to show the latest Marvel movie in the first week it’s out, because that’s taken care of by your IMAXs and Odeons. It sounds like marketing schtick but it really isn’t, when I say I want to make The Electric the go-to place for film lovers, because that's what I am. But it’s also a business so it’s a balance of running the stuff we enjoy and making sure we take money. If we showed just films that I like, we would have gone out of business years and years ago. We need to understand the audience and my daughter, Katie, has moved up to Birmingham to do just that, and she’s as nuts about cinema as me. She’ll be there speaking to the visitors, learning from them. Finding out what they want, from what sort of films they like to how they take their coffee. There’s a strong sense of ownership about The Electric and that’s what we want to engender. It's Birmingham's cinema, not ours.

I guess the most common criticism of The Electric would be that it’s starting to look a little shabby. Is that something you’re addressing?
Oh that’s interesting and good to hear, in a way. I’ve been sort of tiptoeing round that, given the outpouring of love for the place that we've experienced. Because, honestly, it’s not looking great in parts and I guess changing that can be a delicate matter. You need to retain the charm but bring things up to date. First and foremost we need to get it technically up to snuff. The picture and the sound need to be as good as possible and then we have to work on the seats. We'll keep the sofas, for now, and maybe replace them later, but with new sofas. I already sense you Brummies love those sofas, right? It’s an expensive process, so changes have to be made incrementally. But you’ll be pleased to learn that we already have two completely new toilets and that’s a positive step, as anyone who had to go that basement gents can testify. You didn't know if you were coming out of there alive.

When will it be finished?
Give us three years and it will be perfect. The best cinema in Birmingham. But come and see us right away as it's already much better than it was.

The Electric opens tomorrow (January 21) showing Belfast (see review below). New memberships are available and very tempting they are too.