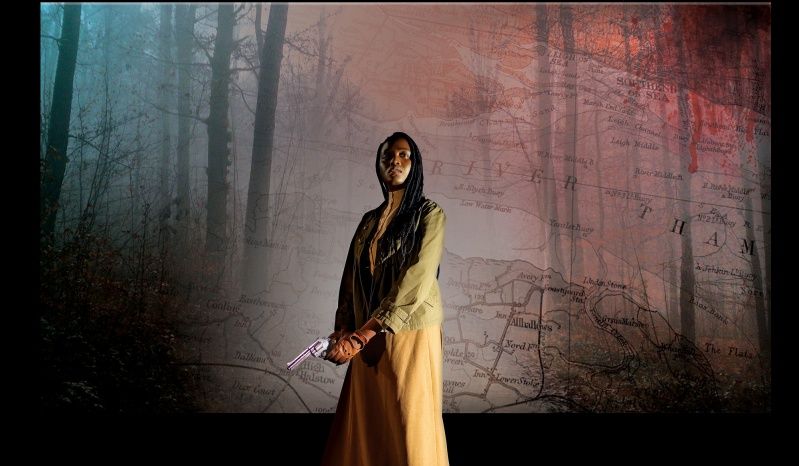 Review: Heart Of Darkness at The Rep

Let’s take a ride up Conrad’s Congolese river into an interior of a continent, of a crazed mind, of a European culture quickly unravelling.

Let’s rip it out of the pages of the book we all had to read in school and put it on a stage. Let’s take this out-of-date novella and cast it into the 21st century.

This new production of Heart of Darkness  at The Birmingham Rep shakes it all up using triple screen video projections, live camera inserts, bits of old movies  and even music by The Doors and Jimi Hendrix  to offer a totally different take on this 100-year-old story. It’s a compelling piece of theatre.

The production company, alluringly called Imitating The Dog, casts the mysterious traveller Charles Marlow as an African female detective paid to find a man called Kurtz somewhere in a dystopic Europe, now shattered, second rate and ruled by thugs. Kurtz is a junkie holed up in a London suburb. The context is a continent, a new dark continent, that never rebuilt after concentration camps, Nazism and cultural hatreds.

Actress Keicha Greenidge is a searching Marlow, driving through an ugly violent Europe. She’s part Conrad’s Charles Marlow, part Raymond Chandler’s PI Marlowe, part Martin Sheen’s soldier in Apocalypse Now. She finds her Kurtz, crazy and murderous, just like Brando in Coppola’s Vietnam movie.  Does she bring back her man to Kinshasa and her payday? Or is she too devoured by Europe’s madness?

Co-directors Andrew Quick and Pete Brooks frame this intriguing play with inserts of the  actors  (playing actors) heatedly arguing how to re stage a late Victorian novel with its racist overtones. Make Africa strong, make Europe an ugly basketcase. Make Marlow a woman detective. Make over history and a respected but difficult novel into something relevant, hard-edged and visually arresting. They’ve done just that.

The Man Behind The Iron Curtain

At their Grand Central venue

A Note From The Editor