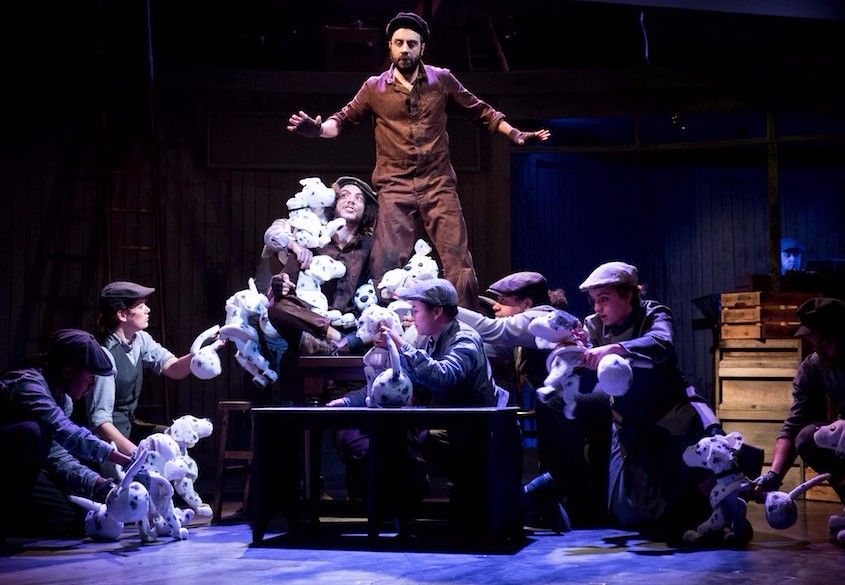 Review: The Hundred and One Dalmatians

by Richard Lutz (and Finn)

Off to The Rep to catch a spot of theatre — well thousands of them actually as it’s about those cute dotty dogs, and their nemesis Cruella de Vil.

But who am I, a dotty doddard myself, to cast judgment on this play based on the children’s book by the marvellously named Dodie Smith? So, I bring along my fellow reviewer — ten-year-old Finn from South Birmingham.

He has seen the film (with Glenn Close), and the animation, so he knows a thing or two about this canine oeuvre.

Finn says: 'I really liked the person who played Cruella [Gloria Onitiri]. She's on Splatalot on tv so it was good to see her live right there in front of me, actually on the stage. I liked the way she had half white and half black hair. But they changed the ending! That wasn't what happened to her in the film."

Finn’s critical bite roamed further as he said the director did a great job too on filling the big Rep with puppet puppies. He especially liked the pup who kept asking about Christmas and the one that was always hungry. But he did wonder if some of the voices were too similar to the human actors that shared the limelight with the dotty dogs.

Some of the slapstick got a bit nasty, he thought, so he advises parents to take that into consideration when bringing along the littlest of littles. But he loved the bumbling Baddun Brothers (Lewis Griffin and Luke Murphy)  ) who stole the cute puppet puppies for Cruella's nasty plan to use their fur for a winter coat.

All in all, a pedigree thumbs up from Finn. He's rating this above a traditional Christmas panto every time. He's also big into The Rep's ice-cream. The Hundred and One Dalmatians is on until January 13. Tickets are from £15.

From Hagley Road to Hollywood

The Barber's latest exhibition is online and interactive

In From The Wilderness

The latest 'at home' restaurant offering

Eat Pizza & Cake. The Run Them Both Off.

Jog Sarehole Mill and earn yourself a medal

A Moment in Time