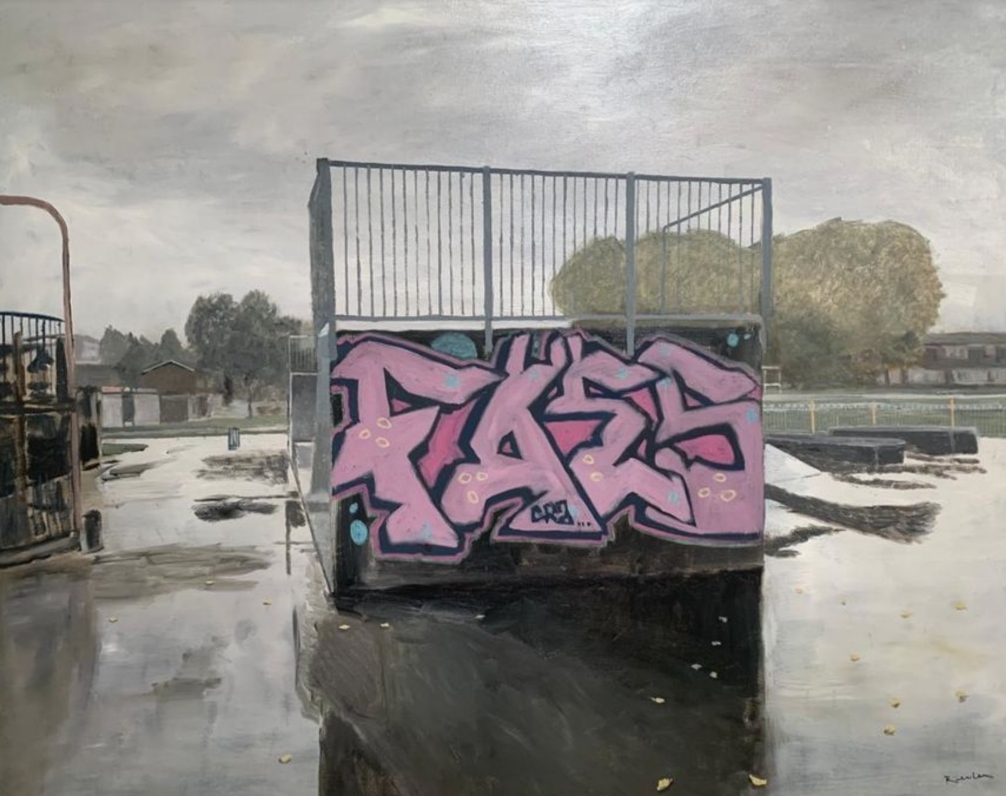 Some of the most interesting Brummies, I think, are those that find themselves in worlds that might be considered luxuriant but they never buy into them. They maintain a Brummie realism and down-to-Earth charm. Michelin-starred chef Brad Carter is one, poet and actor Benjamin Zephaniah another. And Reuben Colley ticks that box squarely and with relish. Fine art educated and a master of oil on canvas there is utter beauty in his paintings, but his work will always remain informed by the city he grew up in. In his latest collection, Skate Park, he has created, perhaps, his most engagingly jarring pieces to date.

When did you start this collection?
The concept came about three and a half years ago. Way back then I maybe painted somewhere in the region of 30 skate park pieces but I felt they just weren’t quite there yet, so I parked it and found other things to do in between. People who saw them thought they were great but I thought they were a little two-dimensional. I knew it had the potential to be a really serious body of work, something I could get my teeth into. But the first drafts were too literal and sometimes you need to take a break and come back to it. What I found was they needed more manipulation of the paint. Some needed loose and aggressive brush strokes and some needed more considered applications. Personally, as an artist, I don’t want to be restricted to one style of application. That’s so boring. Painting needs to be expressive.

Is leaving art for months or even years and coming back to it common?
It’s how I was always taught. Serious artists that I know operate that way, yeah. You need to sit and live with the work if it’s not flowing like you may want. You evolve somewhat — it takes time to notice things, I guess. Perhaps it’s as simple as that. The art world today is very instant. There’s a lot of commercial galleries where it seems to be a production line — churning art out — but I think that contradicts what art is. Art should be a struggle, which is why a lot of those 36 original paintings got painted over. 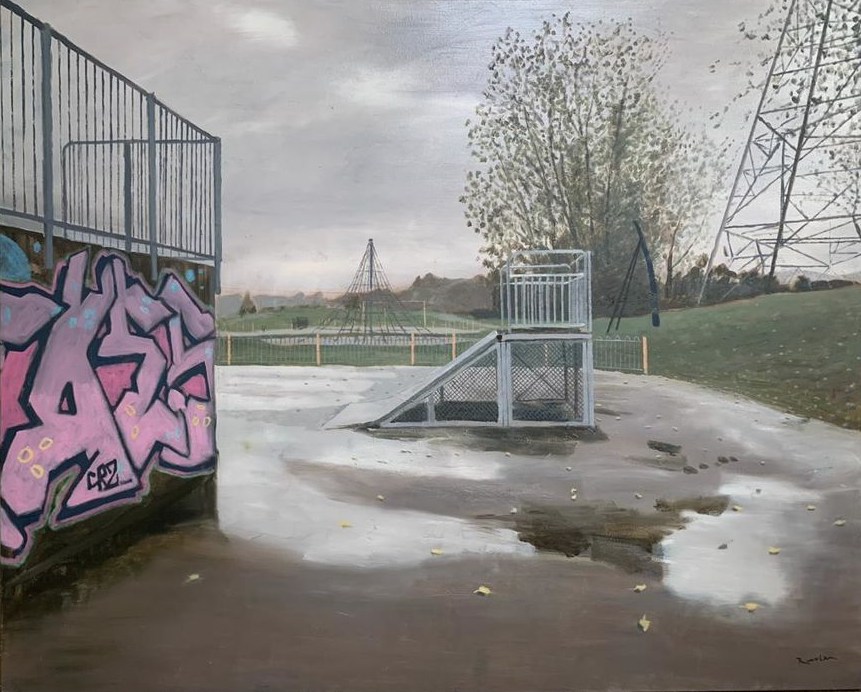 You reuse the canvas?
Oh yeah. I enjoyed working over the brush marks from the previous iterations. They often give the covering piece a new dimension. It’s all about trying to breakdown the barriers of what people might consider is ‘normal’ painting.

So underneath most of this collection is another painting?
There could be four underneath. You know when something’s right. You get that feeling. And you don’t stop going until you feel it.

You’re going to say no, but do you ever feel like saying to yourself: “oh that’ll do.”
[Laughing] No. It’s not in my nature. If I’m not happy with a painting I start again for me. Not for anybody else. So I can feel at ease.

So is there a cathartic release when you finish a painting?
Erm… I felt good when I finished the collection, but not necessarily when finishing individual paintings. I feel content when one is finished but it’s not a rush of catharsis. Painting tends to be either going well or going badly and that doesn’t tend to align with when you finish one or are midway through. 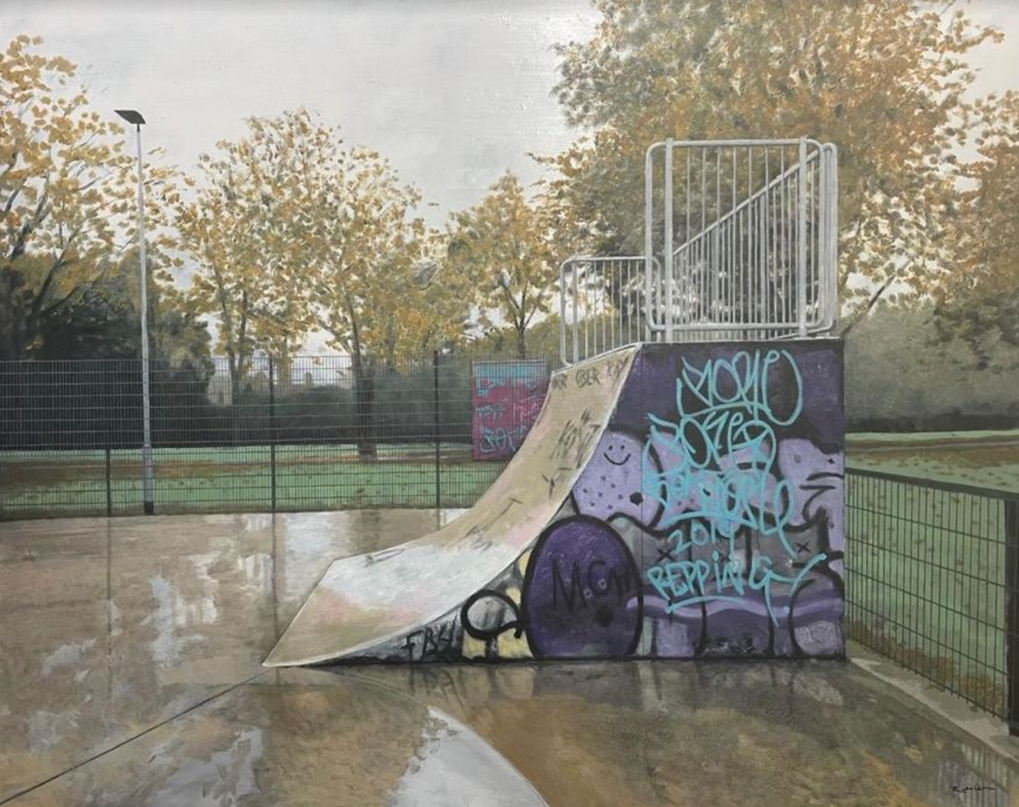 Did you skate as a kid?
I did. I started skating at Handsworth Grammar. There was an after school club. I lived in Hodge Hill back then and I got into it quite seriously — started going to the ramps at Birmingham Wheels. I guess from 12 to 17 I skated every day, taking a skateboard with me everywhere I went. I still have a load of them at home — they’re life memories things like that, aren’t they? Important stuff.

So was this a trip down memory lane for you?
Sort of. But I never really stopped swinging a glance at a ramp whenever I saw one, whatever age I was. So the collection feels more current than you might think. But I hadn’t really thought about painting them until, like I said, three and a half years ago. It sort of surprised me that I hadn’t had the idea of painting them before then. I remember the moment that it came to me to do this, actually. I was driving home for the gallery and it was absolutely bucketing it down. I drove past a skatepark at Perry Barr [Autumn Ramp, above] and it was completely empty because of the weather. But it came to life for me in that state. It’s sort of ironic that I found the life in the park when nobody was using it. When it was obsolete. I started noticing reflections, the autumnal colours. I started taking photos and thinking of how many of these parks I know from my youth. From then, whenever it was raining, I would head out to another park and get another body of reference. Chelmsley Wood, Bromford, Kingstanding. It’s something that could have kept going and going. 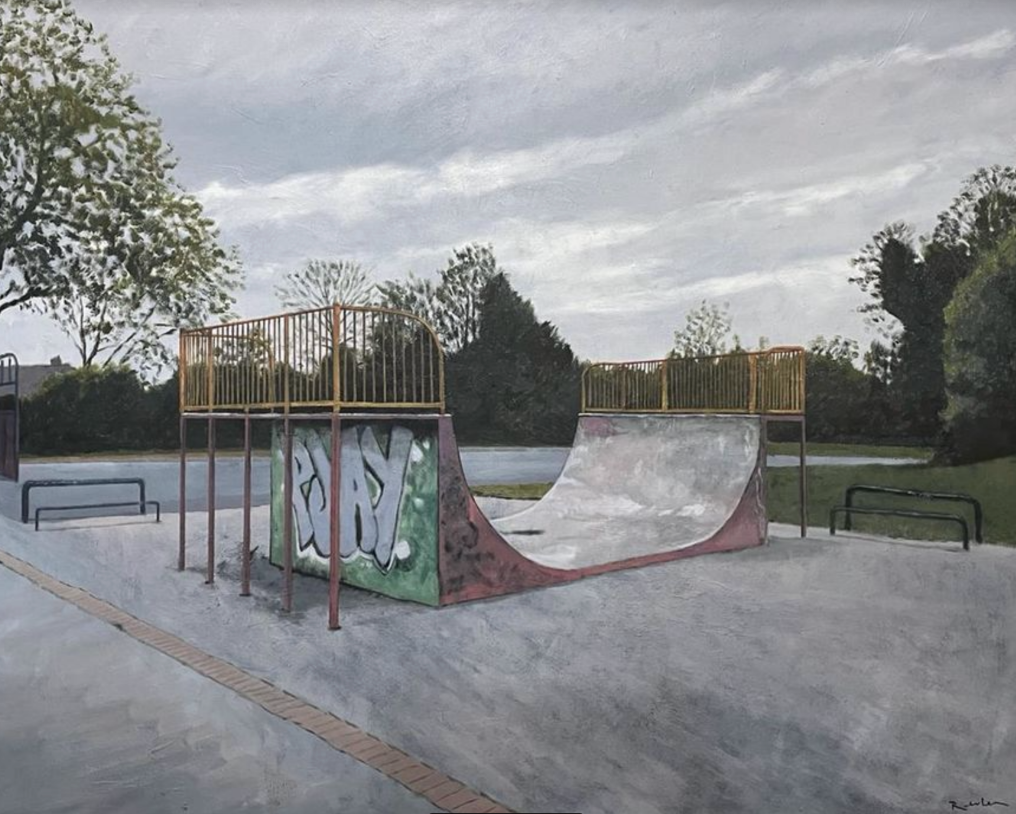 Presumably the collection isn’t only appealing to those who have history in skating?
I hope not. Oddly enough I don’t see this collection as being about skateboarding. I feel like these monuments are almost like sculptural installations. Almost Brutalist, aren’t they? I love the juxtaposition of the shocking shapes of the ramps versus the natural background of the park. It’s that range of spectrum that attracted me.

You’re often drawn to things that most people wouldn’t describe as traditionally beautifully. How come?
Beauty is of importance to me in a painting but so is a sprinkling of the unconventional. I mean, the environment I grew up in, here in Birmingham, doesn’t necessarily lend itself to traditional beauty. Inner city Brum with the seasons and the elements rolling through it, is very different to out in the countryside. I feel very familiar capturing the places I grew up in. There’s a greyness to this city that I really love. It’s beautiful to me. If something is twee or chocolate boxy, that feels to me like false beauty. It’s the architectural equivalent of botox. We’re straight-forward people, us Brummies, and hopefully there’s a straight-forwardness here. You soak up your surroundings, don’t you? Your life experiences. And as an artist they often come back out.

And just as much as these won’t necessarily attract just skaters, is there a hope that it might tap into an audience that don’t normally engage with art?
Absolutely. Nothing would make me happier than for a load of new faces to come through the doors of the gallery, to take a look 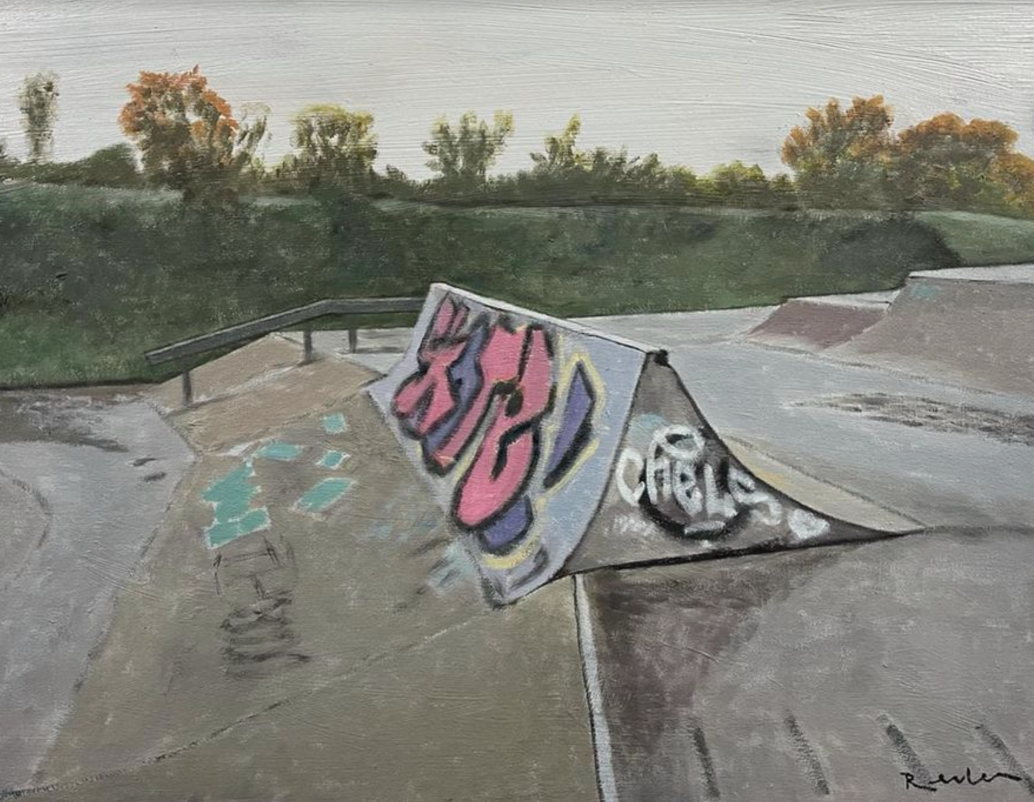 Chronologically speaking this collection spanned lockdown. Is some of the loneliness we experienced in lockdown coming through?
Honestly? Probably not. Being an artist can be quite a solitary existence. You’re in the studio a lot and, man, I’ve been doing it for 25 years. That’s not to say I don’t enjoy it though. I could be painting people, that’s less solitary but I wouldn’t have this appreciation I have for light and weather and scenery, and this sense of place.

How long does one take to paint?
Well that varies a lot but one can take eight months maybe. Working with oils and using layering techniques you don’t want to disturb the layer below. When the paint’s going on nice and thick it can take three weeks just to dry, before coming back to it. It’s a patience game. That’s the discipline.

Last time we spoke, two years ago, you said you’re always asking yourself questions and that perhaps life would be quieter if you could stop. Have you managed that?
No. You better yourself by being self-critical. And I’m not just talking about as an artist, I’m talking about as a person. Realising your own faults is key to life.

What happens now? Do you stop painting for a bit and relax.
I’m always seeing points of interest in things and, for as long as that’s the case, I’ll always be painting. Besides, painting helps me relax.

Oh really? So it’s not like how you hear that the last thing a chef wants to do when they get home is cook?
Well I dare say some chefs find cooking relaxing — maybe if it’s someone else’s recipe, not theirs’? I’m emulating a Monet right now and I find that very calming. Replicating the brushstrokes. It’s an escape from my own work. I don’t have to think about what I’m painting and why. Monet’s already done that for me.

And finally if I handed you a skateboard right now, could you show me a trick.
Absolutely. It’s just like riding a bike…

The exhibition is free to attend at Colley Ison Gallery on Colmore Row and runs until October 15. Prices for signed editions start at £300. There will also be hand-finished pieces where the graffiti can be personalised. These start at £2000. You can get 10% off skatepark editions (not originals) with the code ichoose10 when buying online. Check out the promotional video here.