A Weekender To Remember

Thunderously good arty fest, Birmingham Weekender, returns August 27 to 29 with 100 free events at Bullring & Grand Central. Surrounding New Street Station concourse, Birmingham Markets and 1000 Trades Square the annual cultural shindig combines dance, music, film, performances and installations across the shopping destination featuring many of the best artists from Brum and the West Madlands. Produced by Birmingham Hippodrome, it'll take over the entire footprint of the beating heart of the city with events taking place on the malls, in shop units and in some of the outdoor areas including Rotunda Square and St Martin’s Square. Crack open the culture bone and suck out the marrow... 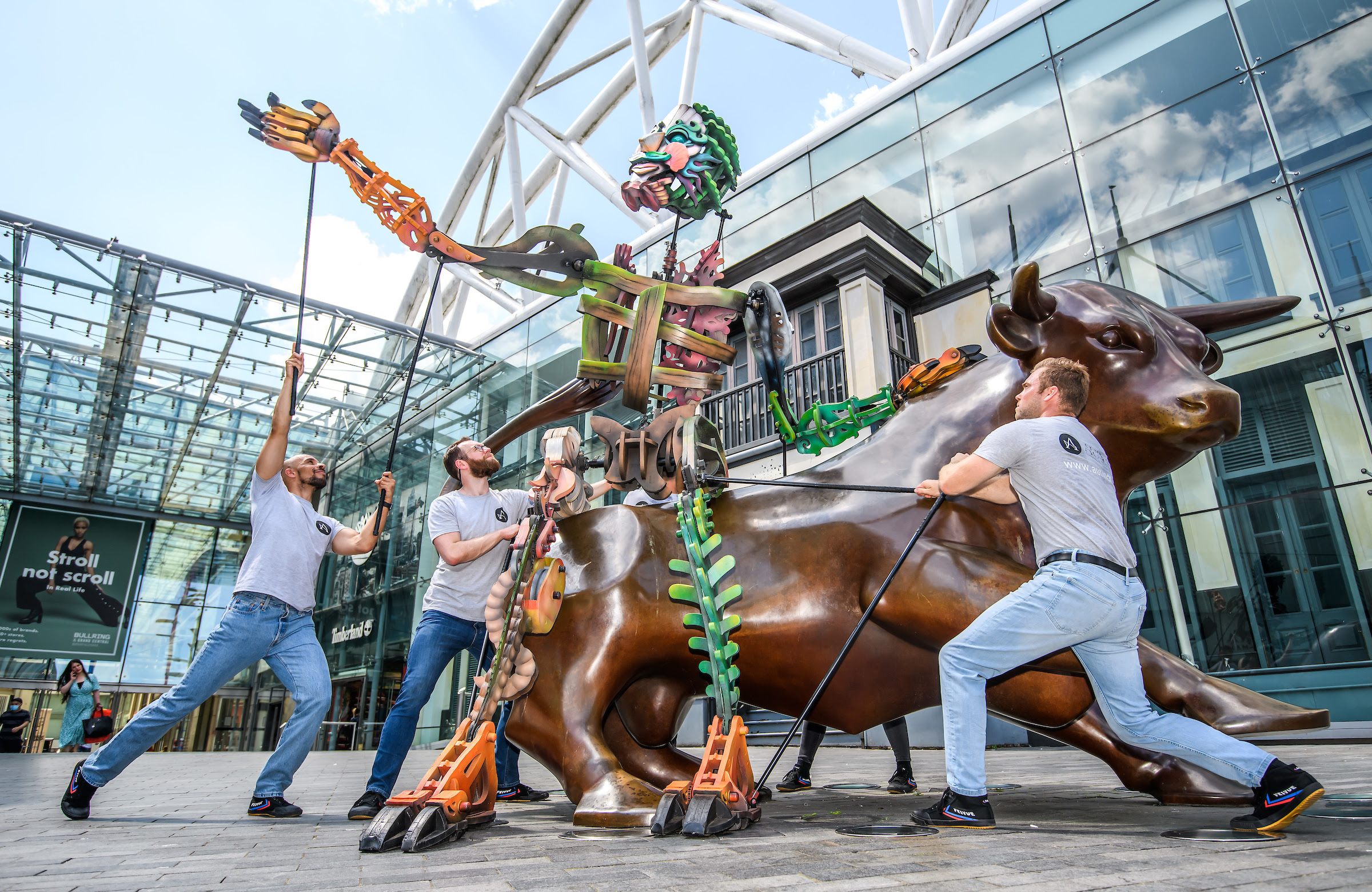 EKO
How about some giant robotic puppetry from the Autin Dance Theatre Company? In a dystopian future (is there any other kind?) waves wash EKO, a sentient Sea Giant, onto the shore. There he encounters vulnerable Violet. These two beings — an ancient creature, a young girl — offer their stories: an impactful dialogue around Earth’s climate emergency, told through dance, movement and masterful puppeteering. Ideal for children and family audiences, but a story about the power of understanding that speaks to the world at large. 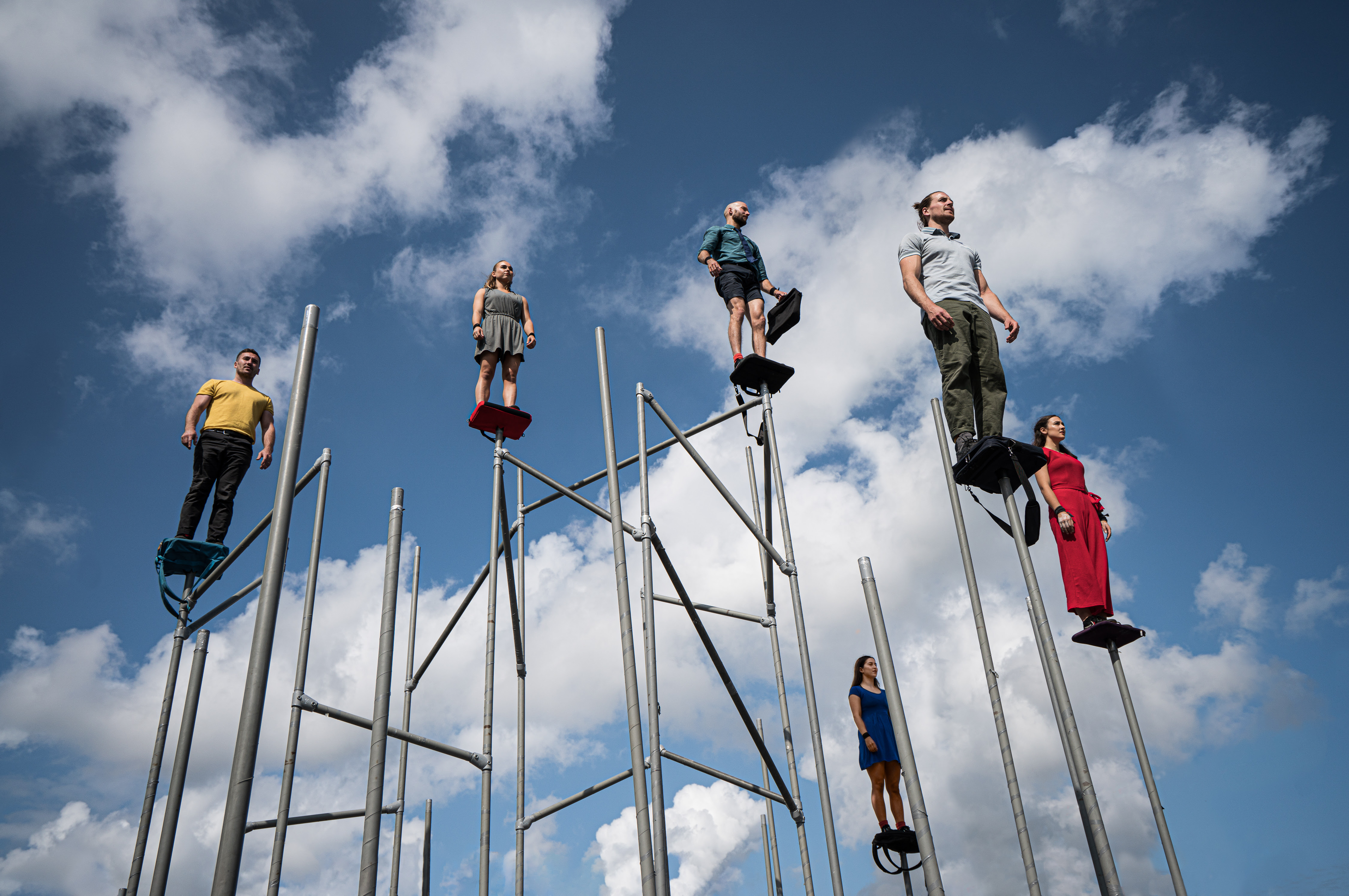 WILD
A pole-based dance and theatre piece from Leamington Spa's Motionhouse, WILD is an urban forest in the everyday of the city. Using the powerful physicality distinctive to Motionhouse, performers use dynamic choreography, acrobatic movement and hand-to-hand partnering to move through a forest of tall poles. From the top of the pole, life in the canopy looks down onto the forest floor — a dangerous world of unknown meetings. This trailer is well worth a nosy. 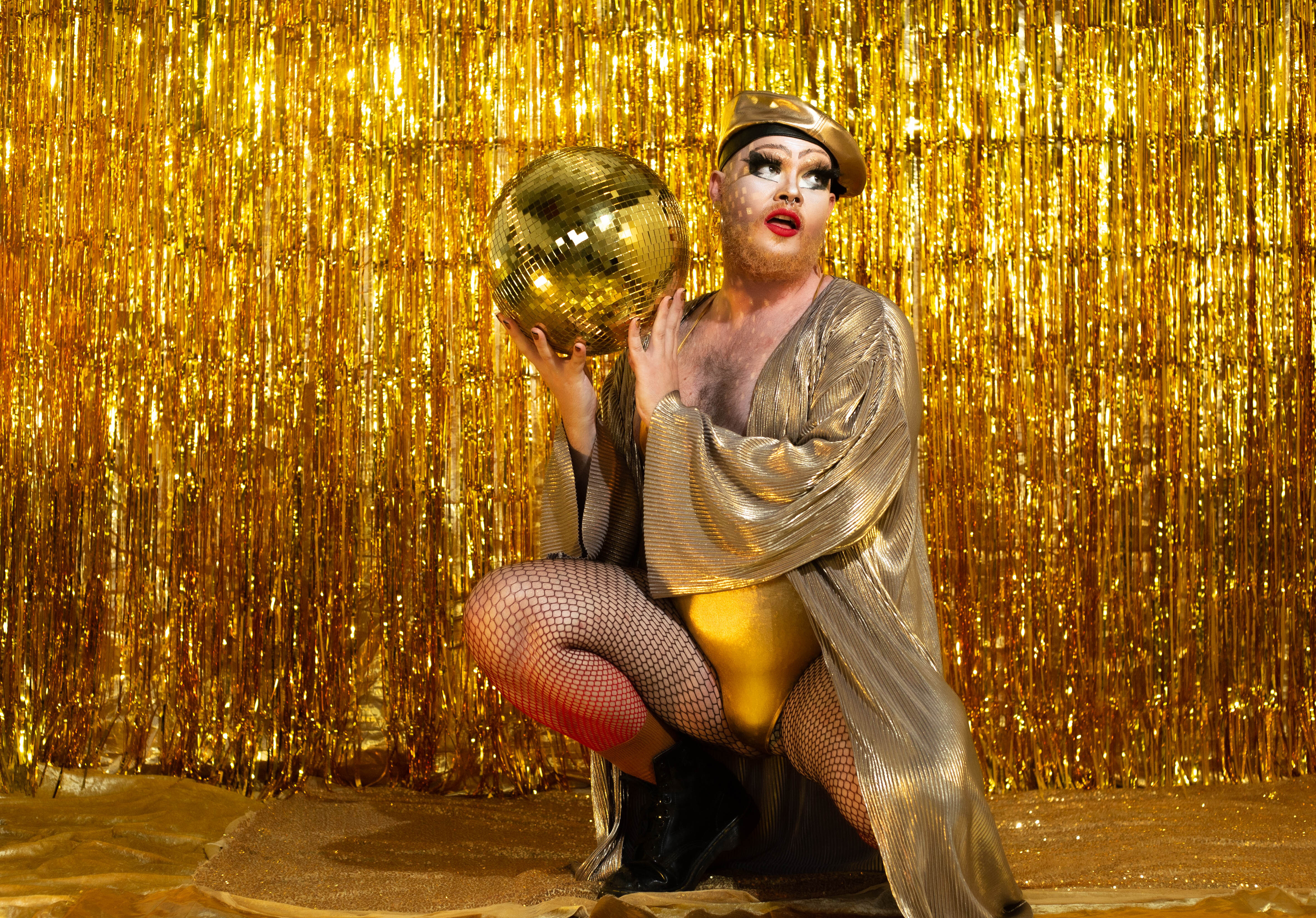 BIG GAY DISCO BIKE
In one of the finest uses of a 'Ronseal' title in recent times, Big Gay Disco Bike is exactly what it sounds like, a feel–good pop-up big gay disco performed on a bicycle. Join cabaret superstar, vocal powerhouse, and overwhelmingly modest drag icon, Fatt Butcher, as the D-I-S-C-O lands in the 0-1-2-1.

Where and when?
Saturday (Aug 28) at 2pm to 4pm Fatt will roam Central Street and Brum Markets. 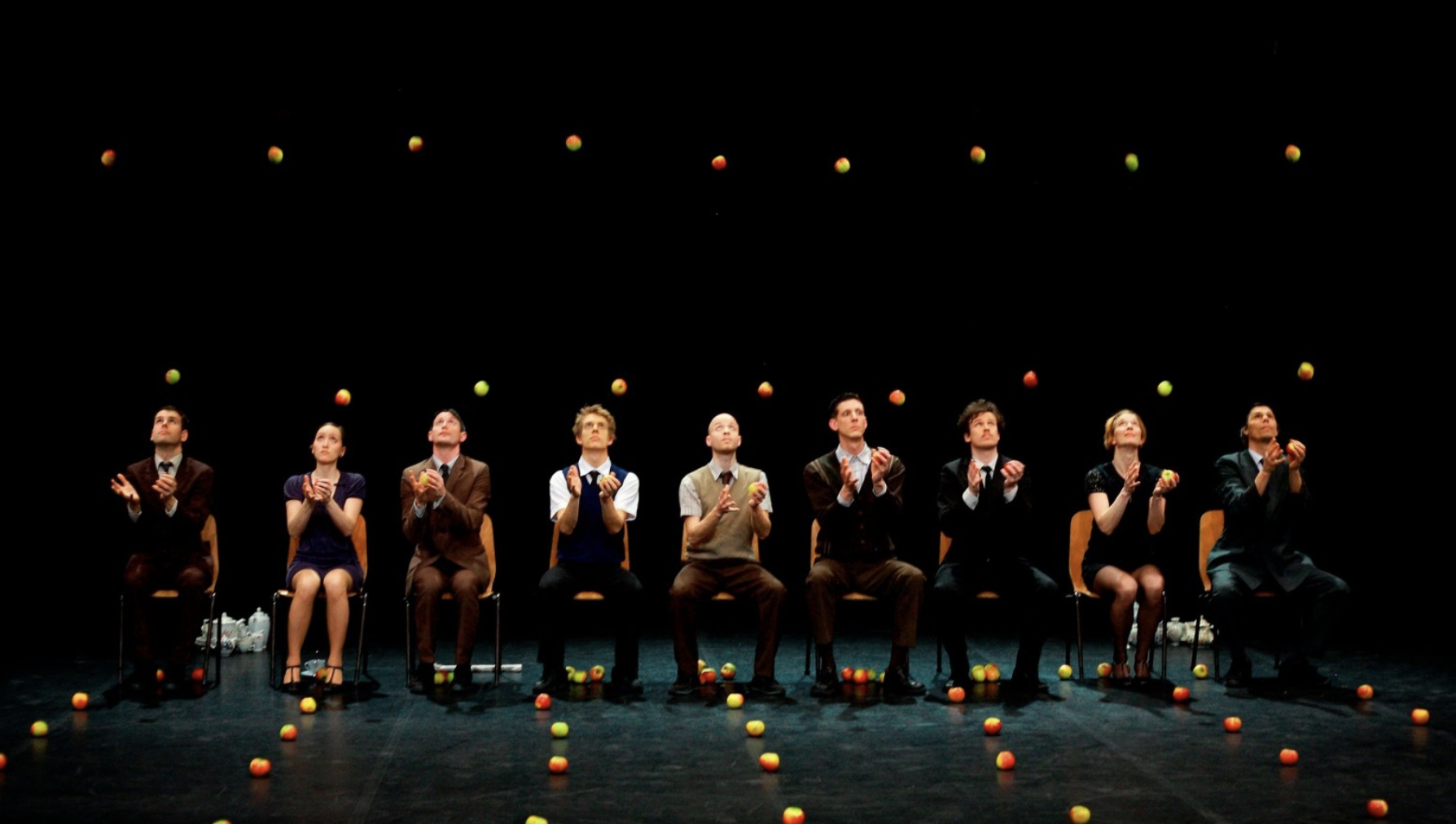 SMASHED
Gandini Juggling bring their award-winning sensation SMASHED our way with the dark art of juggling. Eighty apples, nine performers, four crockery sets— Gandini cordially invite you to a tea party unlike any other. At the forefront of contemporary circus for over 20 years, and having performed in over 40 countries, this award-winning sensation is a mesmerising mix of circus and theatre. 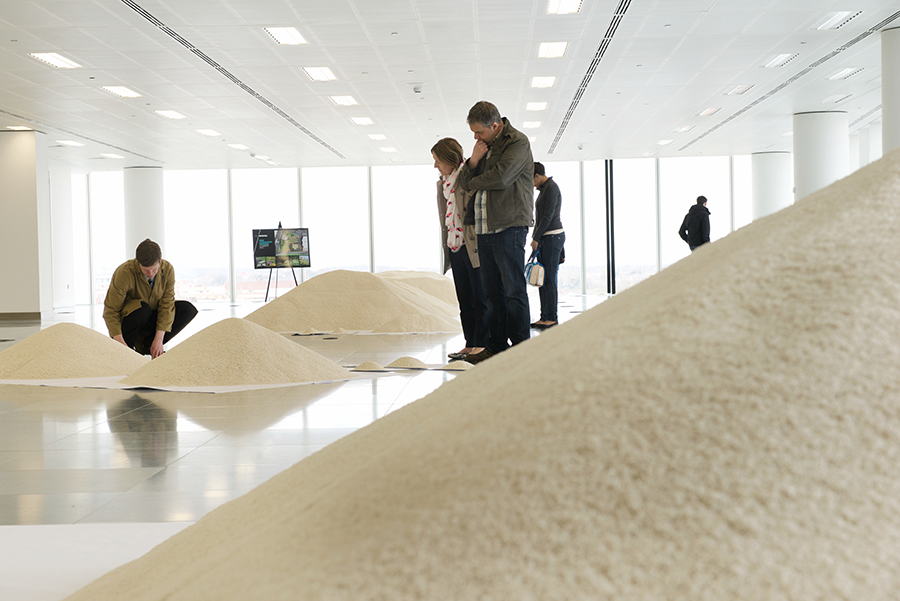 STAN'S CAFE
Stan’s Cafe offers a grain of truth about our planet: every grain of rice represents someone, somewhere. For this beautifully simple performance installation, the artists build small and large mounds of rice representing political and social realities in the world: one grain of rice for the Queen, twelve grains for people who have walked on the moon, a pile for teachers in the UK and a small heap for millionaires in Europe. By making normally abstract statistics tangible and placing them in thoughtful relation to each other, this powerful work of art — Of All The People In All The World — is witty, shocking and ultimately moving. 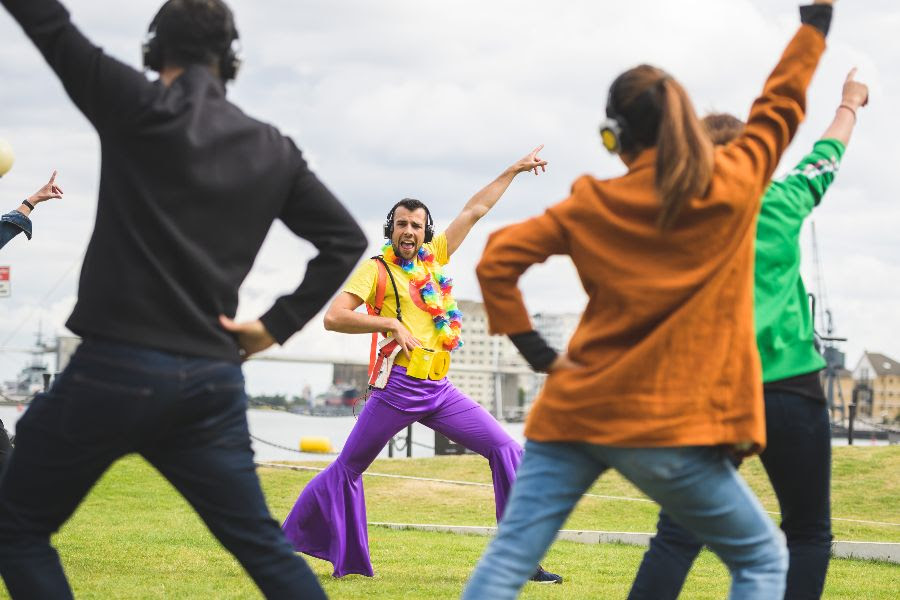 SILENT DISCO TOURS
The Guru Dudu team presents Silent Disco Walking Tours fresh from a sell-out season at the Brighton Fringe. Go on a chortlesome dance-walk adventure through the Birmingham Weekender — headphones provided. Listen to the humorous commentary from your tour guide and immerse yourself in spontaneous flash mobs of dance and singing in the streets to uplifting tunes from the 70s, 80s, 90s and 00's. Suitable for all ages but you will need to book. 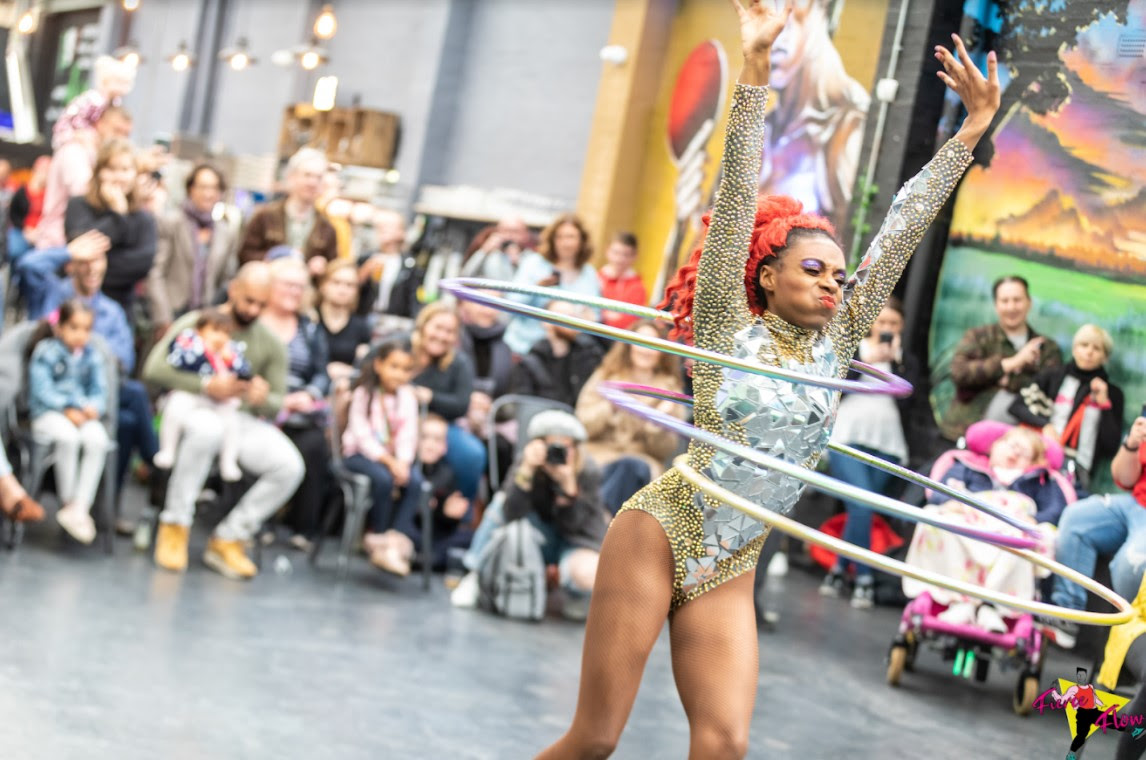 FIERCE FLOW
Fierce Flow is a brand new circus-cum-dance show about black joy and block parties. In a phenomenal all black and POC cast, the team of party goers proficiently challenge what circus is and can be. Sexy, silly and bold in equal measure, it's all about taking up space outdoors in exciting and energised ways. 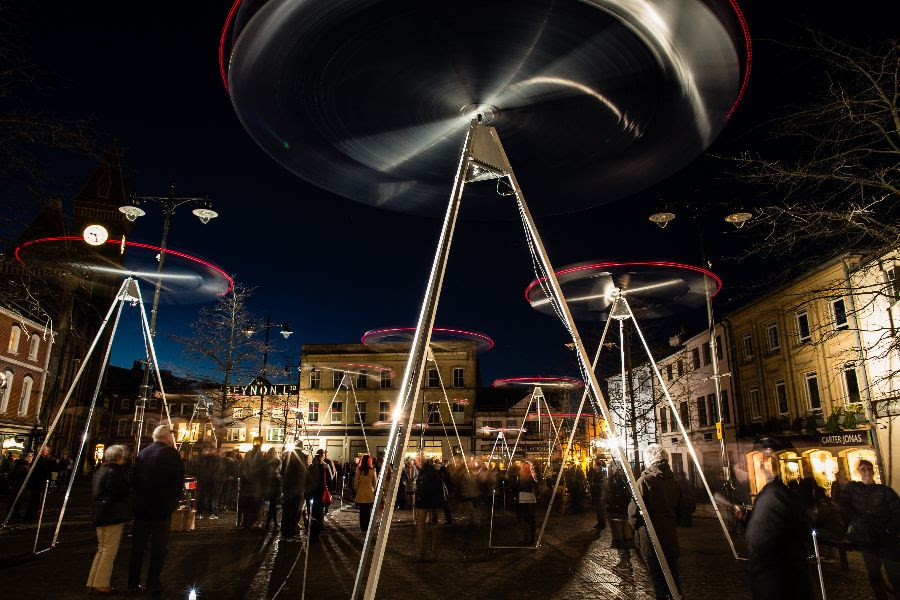 CHORUS
Award-winning artist and British Composer of the Year, Ray Lee is an artist who makes music that moves. Born out of a fascination for the invisible forces that surround us, his spectacular sound art works have transfixed and delighted audiences the world over. Ray’s latest piece, Chorus, is a monumental installation of giant kinetic sculptures, a celestial choir of spinning sound machines. Towering above the audience, a series of giant metal tripods support rotating arms. At the end of each arm, loudspeakers emit precisely tuned musical pitches, singing out a siren call to all those present. Tiny lights create the effect of planets in motion, mesmerising orbits of colour. These intersecting lights trace rings above the heads of the audience, while the combined chorus of the spinning speakers creates a hypnotic, harmonious whole that is both uplifting and transfixing. Not to be missed. 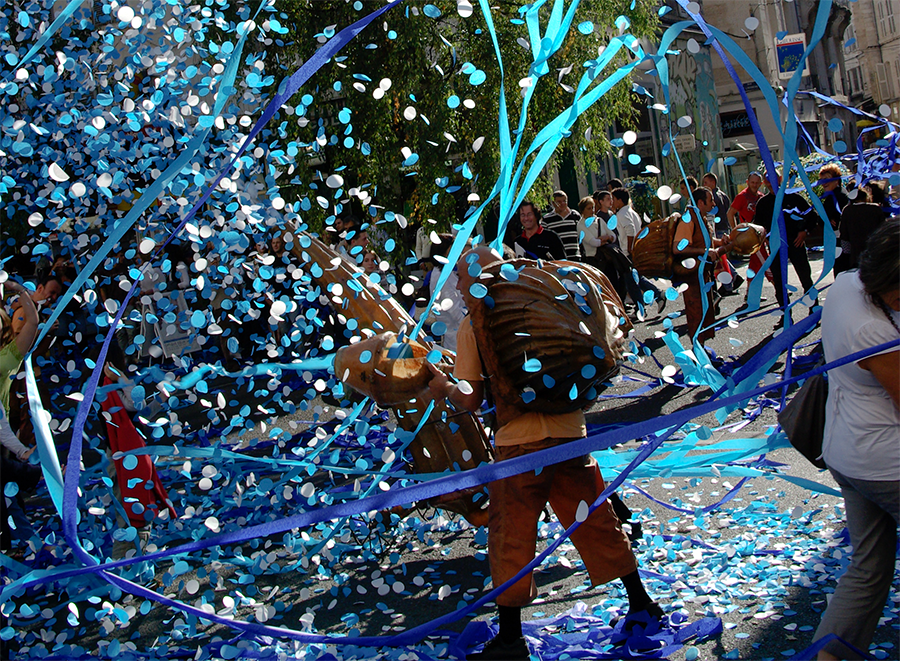 A MERRY URBAN MESS
This looks like any kids' dream. Five characters with 16kg backpacks wander the streets for over an hour blasting out giant streamers from what look like steampunk versions of Ghostbusters proton paks. A torrent of confetti and ribbon will rain down upon you as French artists Cie Vernisseurs patrol the city, leaving colour and smiles in their wake.

Where and when?
St Martins Square and Rotunda Square (times and days TBC, the schedule will be updated here) 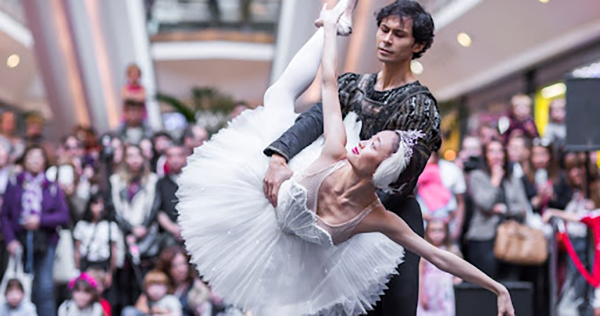 ALSO IN ATTENDANCE...
BIRMINGHAM ROYAL BALLET: The BRB will be doing live rehearsals between 1pm and 4pm on the Friday at Bullring's Lower West Mall.
STILT DJs: Nutkhut’s larger than life superstar DJs (on stilts, no less) bring banging Bhangra Beats from up high, wandering about the Weekender at various points.
THE COMMENTATORS: Moseley Folk regulars and Stan's Cafe pair the Commentators will be bringing their sideways take on proceedings across multiple sites at multiple moments. Veh veh funny.
FLATPACK FESTIVAL: Filmic sorts Flatpack will be taking over the big screen in St Martin’s Square across the weekend to present a series of short films. Delving into the archives to explore how the city and its inhabitants looked (and sounded) back in the 60s, 70s, 80s — expect to see a very different-looking Bull Ring. Saturday (12pm to 8pm) and Sunday (11am to 5pm).
CAR HORN CONCERTO: Before Tomorrow was written by Fabien Levy in 2020, inspired by what was happening around us all at the start of the global pandemic. Here, a truly unique composition of six cars sounding their horns will play the piece on the 4th Floor Edgbaston Street Car Park at 1.30pm, 2.30pm, 3.30pm and 4.30pm on Saturday and 1.30pm, 2.30pm and 3.30pm on Sunday.
FRICTION ARTS: A professional caricaturist will be offering free portraits to passers-by while the team members engage them in conversation about their pandemic. Key statements are added to the final portraits which are then publicly displayed as an outdoor exhibition. Saturday 12pm to 5pm and Sunday 11am to 4pm, around Birmingham Markets.

Times and locations are subject to change. Central Street is the pedestrian route that runs between Bullring's two wings. Full programme