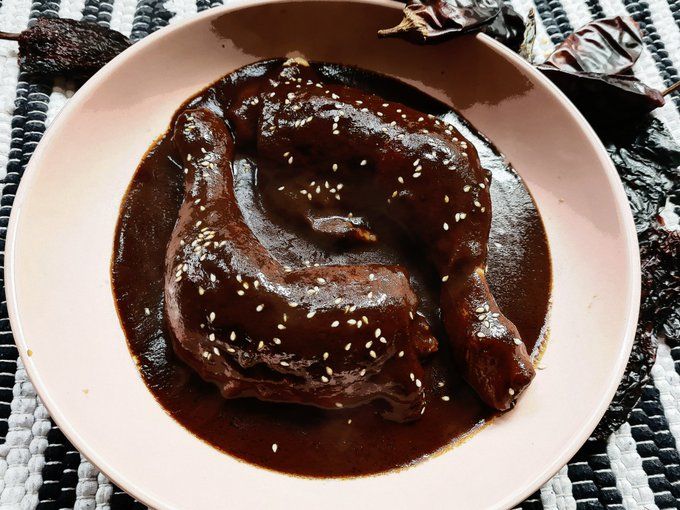 It's been three years since Birmingham's bravest restaurant, Two Cats Kitchen, closed. Run by chef Niki Astley, the 'New Baltic' menu was gung-ho, inventive and batshit in equal measure, gaining national broadsheet plaudits from its charming JQ home. Since the doors closed (and were re-opened as Alex Claridge's The Wilderness) Niki's been running a consultancy and private party service but, with private parties now Prohibition-era levels of illegal, Niki has launched a food collection service, the first was at Eat Vietnam (Stirchley). The beauty of this particular offering remains in its charming out-there-ness. The first iteration was Mexican focused, Astley's son and extended family being Mexican, with Niki making many a trip that way. But basic DIY burritos, this ain't. Incredibly easy to put together the Wonka-esque hard work has been done for you in the thick seven-chilli and chocolate mole sauce that you'll drizzle over your chicken. Reader, you should try this. Doubtless it'll split opinion but combined with spicy salsa borracho and frijoles (beans), the slightly sweet, smoky, earthy and bitter sauce sings like a mariachi leadman. Unlike Niki, I've never been to Mexico, so I don't know what authentic is, but I'd bet my bottom dollar this is it. Bone sucking, finger-around-bowlingly beautiful, Niki's commitment to the different makes our city's dining scene a significantly more interesting place to explore. And in a world where you can spend £25 for two at Nandos, this was real value for money and a talking point to lighten a lousy lockdown. Shame I live alone. May bricks and mortar be his once more — follow on Instagram for his next shake-up.

I Stand on the Shoulders of Giants

Your Chinatown Needs You

"Made me pause The West Wing twice"

A Chinwag with Foka Wolf