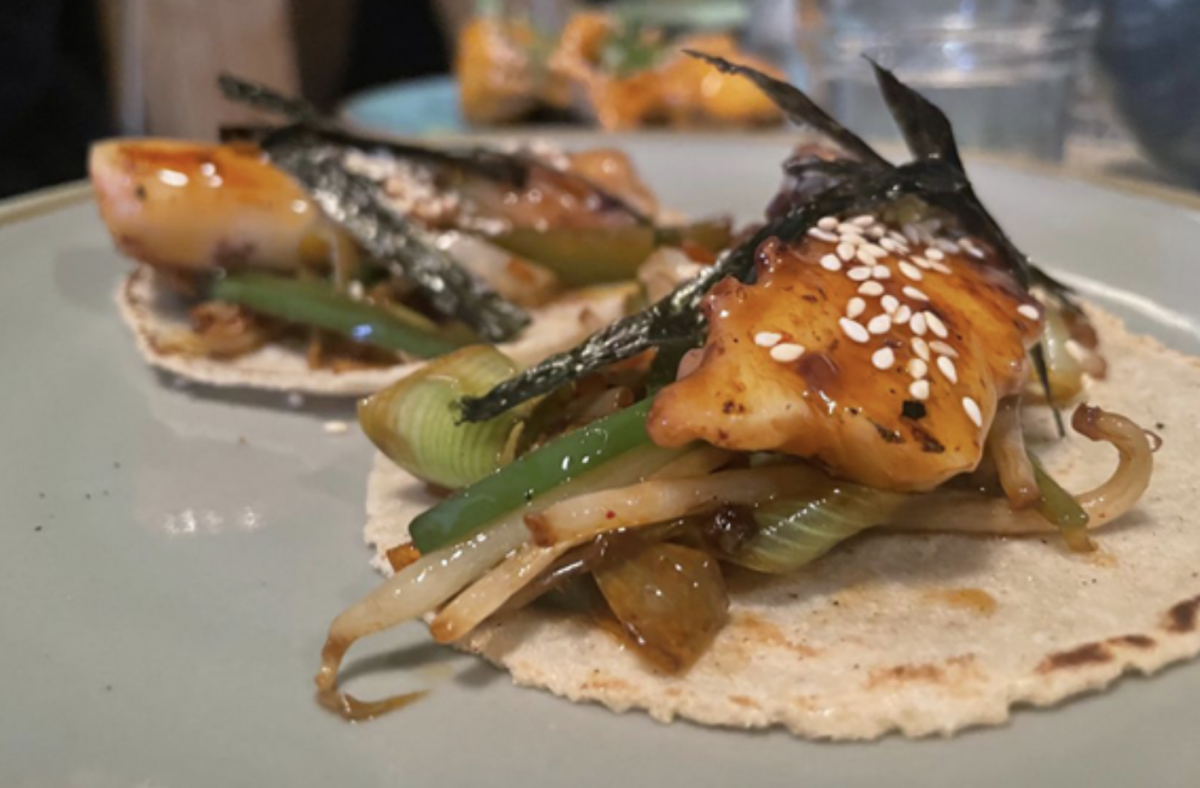 To break kayfabe for a minute, I haven't eaten at Tierra since they were a Stirchley pop-up and, as exciting as it all was, it didn't quite hit the gastronomic top notes of sister restaurant Tiger Bites Pig. Since finding permanent digs on the paved gold streets of the Jewellery Quarter, the reviews have skyrocketed and it's to the owners' credit that certain Mondays in January are being treated as a testbed of sorts; a showcase for their in-house chefs to flex their culinary muscle on dishes that don't ordinarily fit the Mexican bill. This week the proving ground was handed to chef Hyeonu Ji, who arrived at Tierra via the usual route... Born in Yoseu, Korea, he moved to Uganda where he completed high school and switched to Birmingham to attend the College of Food. So far, so very standard! Graduating last year, he joined Tierra as a Commis Chef, just as the restaurant opened, and he's progressed to Chef de Partie. There was a hum of excitement in the diddy restaurant for his Korean taco one-nighter, the inspiration for which was the iconic Kogi bbq food trucks of Los Angeles and, most famously, Roy Choi’s fusion of classic Korean dishes with Mexican street food. The air of expectancy was, at times, visible on chef's face when he appeared at Tierra's tiny peep-hole pass to expedite his dishes. But did he deliver? Did he ever. Korean chicken thighs (£5) were tender and juicy with that sugary, salty sauce playing Pelé-grade tastebud keepie-uppie. The train wreck that was me trying to order tteokbokki (£5) was worth it when spicy, savoury Korean rice cakes came out, deep red in collar and whalloping in warmth. I later found out they remind Chef Ji of home, a country he misses, the snack he had as a kid. I have no comparator for this incarnation but I'd place good money on it having done his childhood proud. The only disappointing dish was the gochujang gritted pork taco with fresh apple and shiso leaf. Perhaps the rollickingly riotous other dishes out-powered these milder parcels, but even with that in mind they came across a little dry — the dippy egg side dish we ordered coming into its own as a Ross from Friends-style 'moist maker'. But it was the seafood that left the biggest emotional crater on planet Tom, with the soft shell crab (£7.50) coming fried in a light tempura batter with gochujang aioli. Smooth, subtle, silky but with the lightest of snaps to the batter, this dish tickled a smile to my face that's reappearing right now as I type. Eat this one when it's still hot and go at it until it's all gone. Incredibly, though, that wasn't the pick of the evening's eating. That honour fell to the grilled octopus with wok fried vegetables, sesame and nori (£7.50). The cephalopod is braised in soy and wine then grilled to finish, the inner meat juicy and bouncy and fresh, the exterior charred and rich and prominent. If there isn't a Fields Medal for umami-ology then there needs to be, and it needs pinning on Hyeonu Ji. At £50 for two (including tip), this was really decent value, especially given it's the sort of one-off you simply won't get to try often, and if you're not drinking there is no better time to take gastronomic gambles. When they pay off, they pay off big time. On the subject of which, Tierra have a tapas night on the way. Booky-booky.