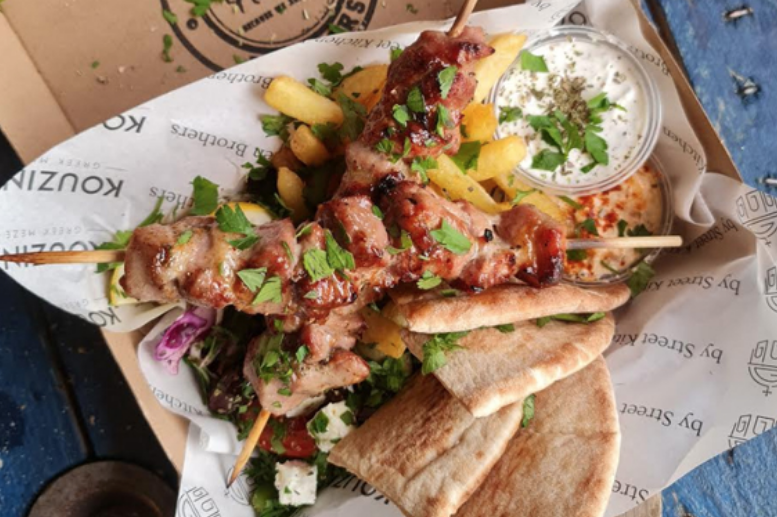 Brum has long struggled with a tragedy of Euripides proportions when it comes to top Greek restaurants. I remember spending a hat-trick of 16th birthdays trying to impress girls between courses at Zorbas, in... Hall Green, I want to say? Plus a few nights in that place next door to Snobs — bloody hell, what a location! The pair of venues were enough to turn me off Greek food for years, until I actually — you know — ate food in Greece. Following the opening of All Greek Street Food on Stephenson Street, comes Kouzina. It's takeaway only just now and the walk through the bustling Bullring got the ol' virus anxiety going, but Selfridges itself was super quiet. A bizarre oasis of tranquility in a shop so often pumping and jumping. It's there, in the food hall, you'll find Kouzina looking a little like this. Branding-wise it fits Selfridges clean cut bill but, when it comes to background, these guys come from exactly where you want them to. A West Midlands-based Greek-Cypriot family business, they cut their teeth in the sink-or-swim world of street food, front crawling full throttle at Digbeth Dining Club, BBC Good Food Show and Lichfield Food Festival, progressing from blow-away gazebo to a fancy Selfridges spot, learning it all the hard way. What I'm saying is, the polished appearance belies soul, energy and passion. It was the friendliness of service that first hit home, as owner Paul Polyviou recommended the pork souvlaki box. The menu houses a wealth of below a tenner options, placing Kouzina squarely in the once-weekly pool of competitive lunch take-outs. The pork arrived quickly (another big takeaway tick), not at all greasy, it was barbecued perfectly, the inside still moist and flavourful. Pork that actually tasted of pork rather than simply serving as a vehicle for char and chilli. This was waaay too much food even for me — if you were to add one of their fresh meze's that start at £3, you have a meal for two for £12 — chips, bread, meat, salad, dips, sauces, the works. Top sellers include anything falafel and halloumi, as well as chicken gyro. But meateaters should plum for that pork, and the taramasalata is so good you'll never accept supermarket slop again. Menu

Free Fitness For All

At the NIA that's not called the NIA anymore.