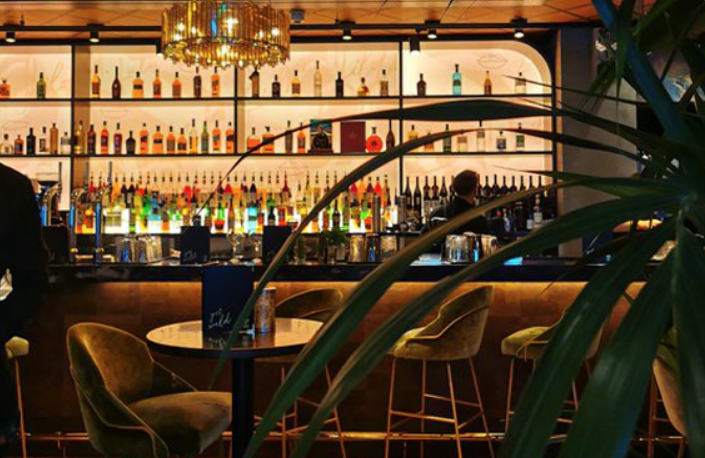 Not sure where to begin on this. This... thoroughly cuckoo evening of Far East Asian food, that will appeal to many but not all. Firstly, worth noting, I attended on the opening week where, thank all the Gods, there was a 50% off food offer. Suffice to say the £37.50 Black Cod dish is several gastronomic pay grades above where I'm at, and a £170 bill for two would have been something of a blow. As it was, it came in significantly lower. Probably for the best, as my table was in front of the restaurant, outdoors and the deepest table into the Brindleyplace thoroughfare where Be At One, Pitcher & Piano and Slug & Lettuce converge. The result was a sort of Balearic strip feel, with groups of (all throughly lovely) revellers in fine fettle, rambling back and forth, the sound of Robbie Williams' Angels intermittently interrupted by a bottle accidentally booted across the pathway. I felt like I was on holiday and I can't begin to explain what a great feeling that was. People watching and having to talk louder than is comfortable, the table on a full 10 degree angle — it was potty, but embraceable. Is that what they're going for? Maybe. I suspect they're looking to lasso in the Instagrammers — the younger generation, often with the slightly sweeter tooths, the cocktails (though drinkable) certainly on the more accessible side of the booze-o-meter. The, frankly nuts, photo opportunity that is a large armchair on which dozens of fake bunnies have been sewn, in neon the words "B*tch Better Have My Bunny" above it, further bolsters their 'grammable but bananas credentials. At soft launches you have to allow for hiccups and ours lay in the long wait and cooler than desired food. On flavour? I wasn't expecting great things — which is a flaw in me, not them — and I came away ultimately pleased. The delightful Russian Roulette of the unbelievably aesthetic dim sum, the scallop option of which was sublime, made for excellent entree entertainment. They did tell us what was what on the £18 for eight Wild Platter, but immediately forgetting was, if not planned, well worth doing. Just beautiful to look at, the goodies within the supple parcels were flavoured well and bought broader smiles to already chuckling faces. The crispy Kung Po prawns (£18) were meaty hits of the sea and although the roasted chicken in satay (£20) was problematically cold, the sauce was mopped with rice and pak choi until the plate was whiter than when it came out. Now, for that Black Cod. It's one of my all-time favourite dishes and I've been lucky enough to eat it three times (Hakkasan, Nobu and Zuma, two of which have Michelin-stars). I'd decided, again not sure why, that this wasn't going to be great. And though it ranks as the fourth best of the four I've had, the sweet, charred exterior housed melting cod that coaxed eyes closed, sit-back-in-the-chair joy. It was only as the waitress cleared away the plate she told me the chef had worked at Hakkasan — for how long and in what capacity she wasn't sure. The portion was the largest I've ever had but at £37.50 seems footballer-only levels of folly. Half the portion and half the price! More people deserve to try it. Then wedge some beer mats under the table legs. Job done. Photo: BabAboutTown